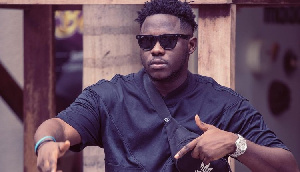 A tweet from Medikal has resurrected the ‘drama’ between him and Fella Makafui days after Shatta Wale supposedly sought to reconcile the actress and the boyfriend.

The relationship between Medikal and Fella Makafui, according to reports, has soured over claims of a supposed infringement by the rapper.

“Somebody tell Fella I’m sorry, I know say people go bore me but I still go fight for love, Chuck Norris I still love you, you’re my baby,” Medikal said in his new song El Chapo.

But that was after a seeming emotional apology on Twitter which also saw the rapper pledge to change for the better and prove to ‘his queen’ how much she means to him.

“Hey Fella, since you haven’t blocked me on Twitter I know you will definitely see this! Listen, I love you, I want us to start a family together! People make mistakes! Nobody be perfect. Will prove to you and the whole world I will be a better man for you and our kids,” the tweet read.

The post has attracted several reactions from tweeps. While some slammed him to end the scripted drama with Fella, others pointed out the law of Karma to him with reference to his breakup with Sister Derby.