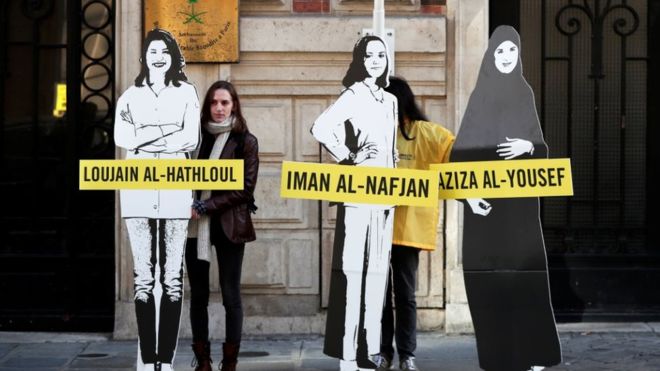 Those arrested are reportedly not frontline activists, but writers and bloggers who have discussed reform.

They had already been under a travel ban since February, London-based Saudi rights group ALQST says.

They were part of a group of 10 women’s rights campaigners put on trial last month following a crackdown beginning in 2018.

That case has drawn criticism from the international community, with 36 states demanding their release at the UN Human Rights Council.

Saudi authorities have not commented on the latest reports.

Who has been arrested?

The latest arrests are said to include at least six men and one woman, according to ALQST.

Among them is Khadijah al-Harbi, a pregnant feminist writer, and US-Saudi citizen Salah al-Haidar, whose mother was one of the activists recently freed.

The other US-Saudi national arrested was reportedly Badr al-Ibrahim – a writer and doctor.

Scrutiny of Saudi Arabia’s human rights record has intensified since the murder of journalist Jamal Khashoggi at the Saudi consulate in Istanbul last October.

Women’s rights in Saudi Arabia have been an enduring focus of international concern, despite some public overtures toward reform from within the kingdom.

The World Economic Forum ranked Saudi Arabia number 141 out of 149 countries around the world for gender equality in 2018.

Earlier this year, the case of a Saudi woman fleeing her family abroad gained high-profile attention.

Rahaf al-Qunun, 18, barricaded herself in a Bangkok hotel room after immigration officials tried to return her.

The teenager eventually received UN help and has since been granted asylum in Canada.