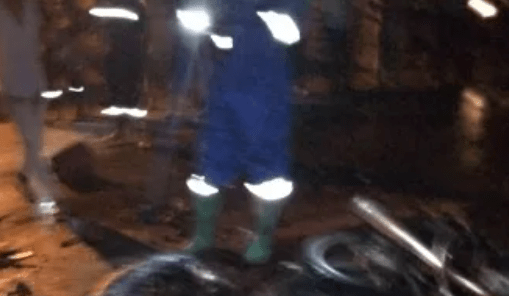 Two persons, including a 20-year-old carpenter only known as Biirbele from Sawla are feared dead after a fatal motorbike accident.

The incident occurred on Wednesday, December 1 involving four riders at Nyange, a suburb of the Sawla Tuna Kalba District along the Sawla Damongo highway in the Savannah Region.

The head-on-collision also left the other two riders on the second motorbike in a critical condition currently receiving treatment at the Sawla District Hospital.

Meanwhile, the body of the second deceased whose identity was not immediately established has been deposited at the Sawla Hospital Mortuary mortuary together with Biirbele.

The impact of the crash was so huge that both motorbikes and the two deceased got burnt in the middle of the road.

According to an eyewitness account, the two deceased’s were heading towards Sawla from the Damongo stretch.

Mahama Karen added that “right after the Nyange curve, the accident occurred. So, they collided head-on and we tried but could not save the dead because they caught fire right away and burnt together with their machine.”

The Sawla Police have since visited the scene, are yet to issue a statement on their findings of the possible cause of the incident.