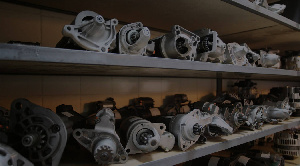 Ghana’s market for refurbished spare parts has been an attractive one because both private and commercial vehicle owners of such spare parts are economical. It has been noted that only Ghana’s well-to-do car owners can afford to purchase branded spare parts from approved sources.

Since the state of many roads is not favorable for cars, drivers are forced to regularly visit workshops to repair and maintain vehicles. This condition has provided a boost to dealers selling relatively inexpensive refurbished spare parts and has also enhanced the economy therein.

The demand for equipment, lubricants, and mechanical accessories has also had a positive effect on individuals and companies importing salvaged spare parts. Abossey Kai and Kokompe, where new, sparingly used and old cars can not escape one’s notice, are the hotspots in Accra to supply refurbished spare parts.

The importers of salvaged spare parts are the government’s source of tax revenue. The majority of vehicle owners in Ghana have also benefited, particularly in terms of affordability. It is therefore a win-win situation for the dealers of refurbished spare parts, the owners of cars, and also for the Ghanaian government.