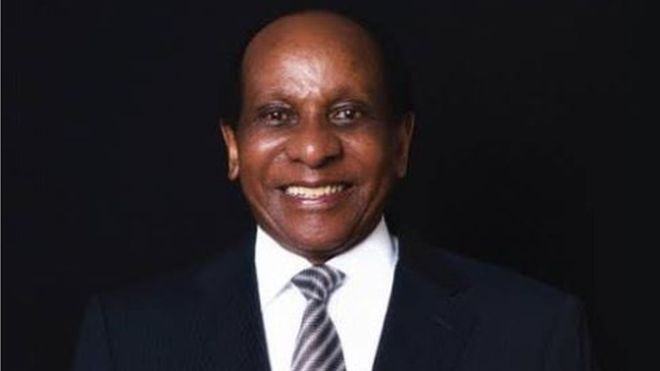 Tanzanian self-made media magnate and philanthropist Reginald Mengi has died in Dubai at the age of 75.

Mr Mengi, through his manufacturing, mining and media conglomerate IPP Group, owned newspapers and radio and TV stations. In 2014, Forbes estimated his wealth at $560m (£430m).

He was born into a poor family close to Mount Kilimanjaro and finished his education in Scotland.

President John Magufuli paid tribute to his role in the country’s development.

Mr Mengi initially worked as an accountant when he returned to Tanzania, but the origins of his business empire are in a ball-point pen assembly plant.

Starting in the early 1980s he turned the IPP Group into one of the largest private conglomerates in East Africa, employing more than 3,000 people, according to the company website.

As a media mogul, Mr Mengi was accused by some, including cabinet ministers, of using his influence against them.

The IPP Group also manufactures one of Tanzania’s best-known brands of bottled water and is moving into smart-phone and tablet manufacturing.

‘I have made enough money’

The businessman felt a responsibility to help build up Tanzania.

“My personal view is that as a media owner, I have a major role to contribute to the development of my country,” he told the BBC in 2005.

“Although I have been saying all the time that I’m in business to make money, but quite honestly, I have made enough money in my other businesses, I can afford to make a contribution to my country through my media.”

He also wanted to inspire younger Tanzanians, saying in his 2018 autobiography I Can, I Must, I Will that he wanted to “cultivate an entrepreneurial spirit”.

Having amassed a large fortune, he became a noted philanthropist, including paying for the treatment of hundreds of Tanzanian children with heart conditions.

From the mid-1990s, through his media empire, Mr Mengi changed the lives of many in Tanzania, BBC Swahili’s Athuman Mtulya says.

With the country gradually changing from socialism, where media ownership was reserved for the state and ruling party, his outlets brought in a fresh approach to global news and entertainment, he says.

The cause of his death and the reason for his visit to Dubai are still unclear.