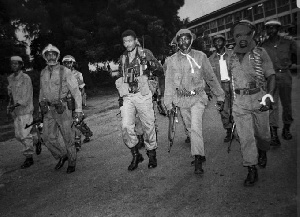 In June 1983, Ghana’s borders were closed and curfew hours extended by the head of state, Flight Lt. Jerry John Rawlings.

This was to ensnare rebel soldiers who staged the fourth unsuccessful coup attempt against his military government.

Rawlings said on Radio Ghana that there was an attempted coup but was crushed after the loyal troops and the rebels fought for a few hours in Accra.

At age 35, JJ Rawlings seized power in the West African nation twice, that is, in 1979 against a military government and 1981, against a civilian government.

Ghana was on a trajectory of prosperity in Black Africa when it gained independence from Britain in 1957 but alas through such military upheavals and bad governance by civilian administrations, the narrative has changed.