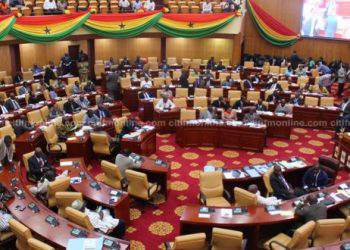 The Constitutional, Legal and Parliamentary Affairs Committee of Parliament will today, Thursday, begin public hearings to consider memoranda on the Anti-Gay Bill.

The Promotion of Proper Human Sexual Rights and Ghanaian Family Values Bill if passed will provide clarity on the country’s sexual orientation laws.

The Committee has received over 150 memoranda from religious bodies, civil society groups and citizens on the controversial subject matter of sexual orientation.

The groups scheduled to appear before the committee on the first day of hearing include the Ghana Pentecostal and Charismatic Council, the Human Rights Coalition, Amnesty International and Advocates for Christ.

The submissions from the groups will serve as input into the report of the Committee before it is considered by the entire house.

Meanwhile, the Speaker of Parliament, Alban Bagbin, has called for tolerance in the public debate on the anti-LGBTQI+ bill currently before Parliament.

He said Parliament will do all it can to create an enabling environment for everyone to share their view on the controversial bill.

Addressing Parliament after the resumption of sittings on Tuesday, October 26, 2021, Alban Bagbin said cool heads should prevail while the bill is debated dispassionately.

“This bill continues to generate a lot of interest and in fact has taken some different dimensions. For me, this is healthy for a maturing democracy like Ghana. It is important that we allow various shapes of opinions to canvass their positions on the bill… As Ghanaians, I want to plead with us to accommodate the views of others. Whatever perceptions we have, let’s maintain the peace and cool heads,” he said.

About 20 Members of Parliament initiated processes to have a law passed to criminalize LGBTQ+ activities and advocacy in the country and proposed jail terms for such actions.

The bill, dubbed ‘The Promotion of Proper Human Sexual Rights and Ghanaian Family Values Bill 2021,’ has been received with mixed feelings, with a section of the public condemning it while others described it as hateful.