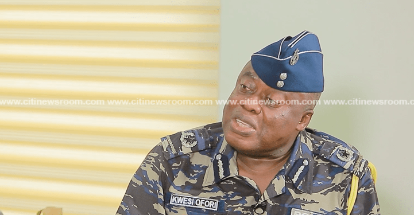 The Acting Director-General for the Public Affairs Department of the Ghana Police Service, ACP Kwesi Ofori, has said the police administration is yet to come across any contempt summons from Parliament following attempts to arrest the Madina MP.

“The invitation has not officially come to the attention of the administration, and when that comes, the administration may take a firm decision,” ACP Kwesi Ofori said to the media on the sidelines of a meeting by the IGP on Wednesday.

The attempt to arrest Mr. Sosu during a demonstration in his constituency over bad roads on October 25 led to the MP filing a complaint in Parliament accusing two police commanding officers of contempt of Parliament.

Though protestors had blocked roads during the protest, Mr. Sosu said there was no basis for any arrest because he had followed due process in organising the protest.

The Speaker of Parliament, Alban Bagbin, referred the complaint against the two police personnel to the Privileges Committee of Parliament.

Police were also reported to have tried to arrest Mr. Sosu while at Church on Sunday though the Police administration denied the reports.

The Speaker of Parliament subsequently refused a Police request to release the Madina MP for interrogation.

The Ghana Police Service has since said it has secured a judicial order for Mr.Sosu to appear in court on November 8, 2021.

In his first formal response to the developments, Mr. Sosu accused the police of being disingenuous with its account of events.

He insisted that he was not involved in blocking roads nor destruction of property during the protest as alleged by the police.

The MP also said the police were trying to shift the public’s focus from the reason for his protest.

“The Police were part of the demonstration from the beginning till the end. There were no casualties, no destruction of public or private property,” Mr. Sosu said.