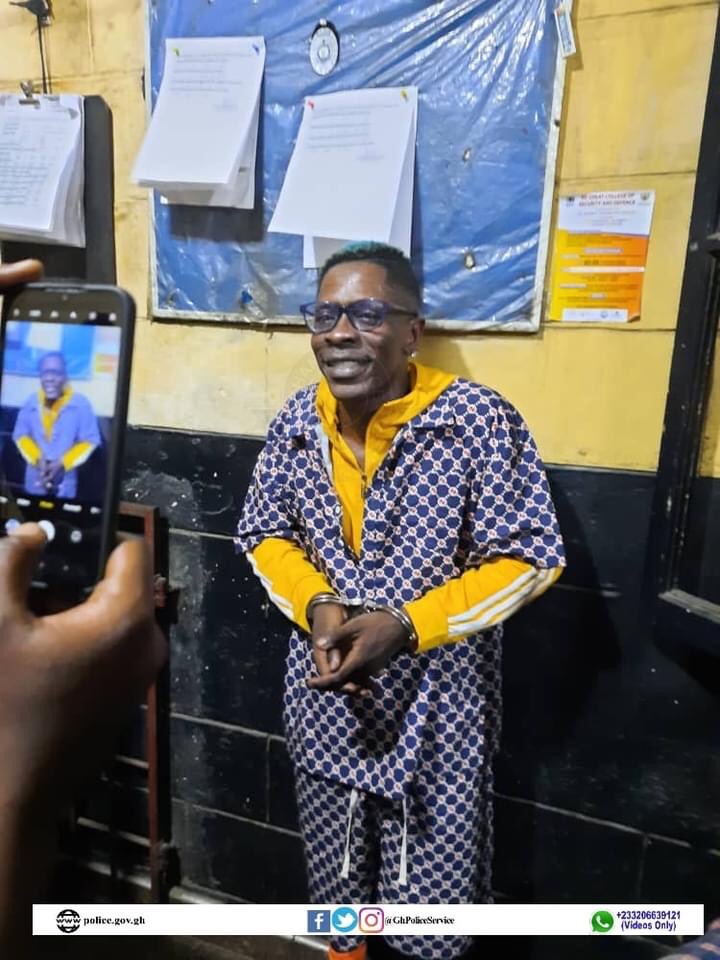 Dancehall artiste Charles Nii Armah Mensah popularly known as Shatta Wale has been arrested by the police for creating public fear and panic by feigning a shooting incident.

He has been detained together with two other accomplices at the Ministries Police station for publishing false information.

This was after he reported himself to the police on Tuesday night after the police declared him wanted for feigning a shooting incident which made it looked as if he had been shot by some unknown gun men at East Legon in Accra.

“After we publicly declared him and one other person wanted, the suspect, Shatta Wale, turned himself in today Tuesday 19th October, 2021, at 8.59pm,” the police said in a statement.

He has been arrested to assist the Police in investigations for his alleged involvement in the creation and circulation of information intended to cause fear and panic, the statement added.

As stated in previous statements, the public is advised to desist from publishing false information, capable of disturbing the peace of the country or risk being arrested and prosecuted, the police statement added.

Also arrested by the police for the spreading of false information in connection with the alleged gunshot attack are two friends of Shatta Wale.

They have been arrested and detained for allegedly spreading false information with the intention to cause fear and panic.

The police said preliminary investigations has reveal that the widely reported gunshot attack on Shatta Wale on Monday was a hoax.

On Monday, October 18, Shatta Wale’s Personal Assistant Nana Dope claimed that Shatta Wale had been shot and was being treated at a health facility in Accra.

He indicated that Shatta, who is due to launch his album, Gift of God (GOG) soon, was responding to treatment

In a statement, the police said they had been unsuccessful in their attempts to locate the artiste, who celebrated his birthday on Sunday, October 17.

“The attention of the Police has been drawn to the widely circulated news on the alleged gunshot-attack on one Charles Nii Armah Mensah popularly known as Shatta Wale,” a police statement said.

On hearing the news, the police have launched an investigation into the matter including making contacts with some of his close friends and family members and all of them claim not to have knowledge of his whereabouts or the alleged incident.

A team has visited the house of Shatta Wale and he cannot be found there.

Over the last few hours, the Police have searched and continue to look for Shatta Wale at hospitals in Accra.

Whilst we continue our investigations, the Police is appealing to the public to provide any information concerning the whereabouts of Shatta Wale to the numbers 18555, 191 and 0302773906.”

Shatta Wale in Facebook post later on claimed he was on the run because his life was in danger.

He claimed that a prophecy claiming he would be shot had left him in psychological distress and the inaction of the police had compelled him to take matters into his own hands and go on the run.

The conflicting reports raised discussions on whether the move was a publicity stunt to promote his “Gift of God” album.

The police on Tuesday morning also arrested the pastor said to have made the prophecy.