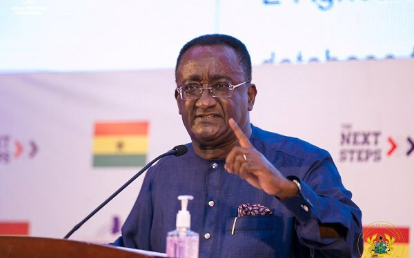 The Minister of Food and Agriculture, Dr. Owusu Afriyie Akoto, has disagreed with claims that there is an increment in food prices in the country.

The Minister said statistics compiled by his outfit do not show a spike in the prices of food.

“That is the wrong perception. The statistics that we compiled in this Ministry do not support that,” said the Minister during the swearing-in ceremony of the newly appointed members of the Irrigation Company of Upper Region (ICOUR).

Recent data from the Ghana Statiscal Service indicated that the increasing cost of foodstuff, among others, pushed the rate of inflation for the month of August to 9.7%.

The spike in prices of foodstuff in Ghana is a reflection of what is happening on a global scale.

According to the UN’s Food and Agriculture Organisation, global food prices increased nearly 33% in September 2021 compared with the same period the year before.

It said global prices have risen by more than 3% since July, reaching levels not seen since 2011.

The Agric Minister explained that a drought in the Southern part of the country had led to an increment in the price of specific foodstuff such as maize in Ghana.

He explained that the increment in the price of maize thus affected the production of the cereal crop and other foodstuff this year.

“This is our fifth year of Planting for food and jobs. Nobody complained about reducing the size of kenkey until this year because there was a drought this year in the Southern part… that affected supplies”

The Minister also insisted that the government’s flagship agricultural programme, Planting for Food and Jobs has so far been successful.

“The Planting for Food and Jobs is very much alive and it is going to carry on. It is maturing; more and more farmers are benefitting. We have seen productivity which is the target for smallholders.”

John Mahama’s assertion was however dismissed by some government officials.