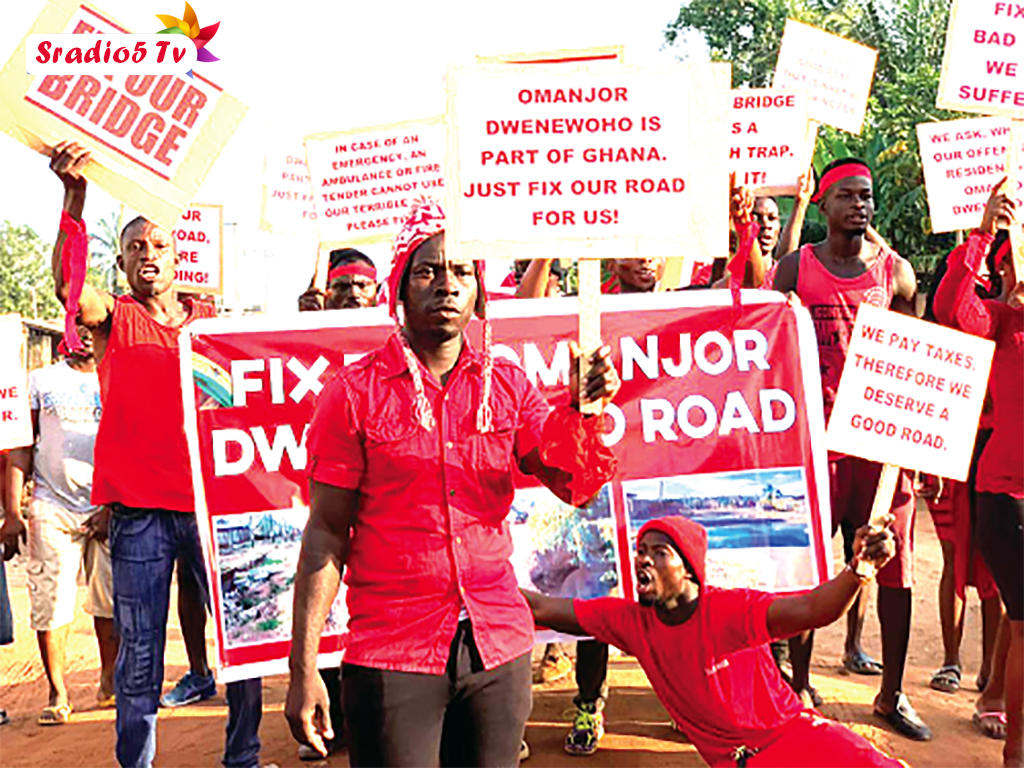 Some residents of Omanjor Dwenewoho in the Ga West Municipality in the Trobu Constituency yesterday embarked on a demonstration to express their displeasure about the condition of roads in the community.

The over 200 demonstrators, mainly youth, chanted and sang as they called for a permanent solution to the undulating road riddled with large potholes.

Mainly dressed in red clothing, the residents marched along the Omanjor-Dwenewoho road assisted by the police, making brief stops at some portions to highlight the problems on the road.

During the 6 a.m. to 10 a.m. protest, the demonstrators held placards with inscriptions such as “Fix the bad road”, “Our bridge is a death trap. Fix it!”, “Fix the ponds on the road”, among others.

In a petition to the government, the leader of the group, Mr Joseph Kpormegbey, indicated that their road was the only road in the community, and using it had become scary and uncomfortable.

He said since they had no hope of any permanent and lasting solution to the terrible nature of their road, the demonstration became unavoidable to draw the government’s attention to the situation.

He said unsuspecting drivers easily fell into the ditch by the bridge on the road, with passengers injured on many occasions.

Recently, commuters from Dwenewoho have had to trek long distances to the main Omanjor lorry station to board vehicles to and from their workplaces because some drivers stopped plying the road, which has developed gulleys.

Heaps of gravels poured on the road have remained in the same situation for months.

“We are, therefore, appealing to the government to fix generally the entire 4.6-kilometre Fanmilk Junction to Amamorley road, which has Omanjor Dwenewoho as a part, to bring relief to residents and road users,” Mr Kpormegbey added.

The Assembly Member of the Omanjor Electoral Area, Mr Ellis Nii Addo, who later joined the demonstration, was prevented from addressing the event as the residents accused him of turning a deaf ear to their plight.

The demonstrators went ahead to present their petition to the Ga North Municipal Chief Executive, Mr Simons Sekyim, but did not meet him