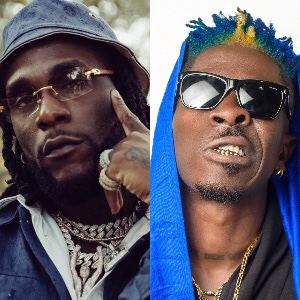 The feud between Burna Boy and Shatta Wale has taken a spiritual turn after an old video of a popular Nigerian pastor predicting how bloody their clash lead to has resurfaced on the internet.

In this video which has gone viral succeding Shatta Wale and Burnaboy’s fight, the pastor prophesied that Burnaboy will be shot to death

Given that the video dates back to September 2021 and contains certain details that could be tied to Burna Boy and Shatta Wale’s ongoing feud.

The video has sparked concern among many social media users with many of them advising the two to immediately quash their beef.

As emphatically stated by Rev E.S Emeka a very well-known Nigerian musician would be killed by a gunshot following a confrontation with another well-known African singer.

Although, the man of God didn’t directly mention both Burnaboy and Shatta Wale’s names but we all can tell them the prophecy is about the two former best of friends.

The beef between Burnaboy and Shatta Wale gained worldwide recognition after the former proposed that he wants to face the latter in the ring to settle the scores between them.

After Shatta Wale declined the fist duel contest, Burnaboy proceeded to accuse his former bestie of raping a certain girl.

Shatta Wale on the other hand also took to his Twitter timeline to also accuse Burnaboy of raping popular IG model famed as Matilda Hipsy.

The two have been at the war front ever after and dropped bombshells on the other.