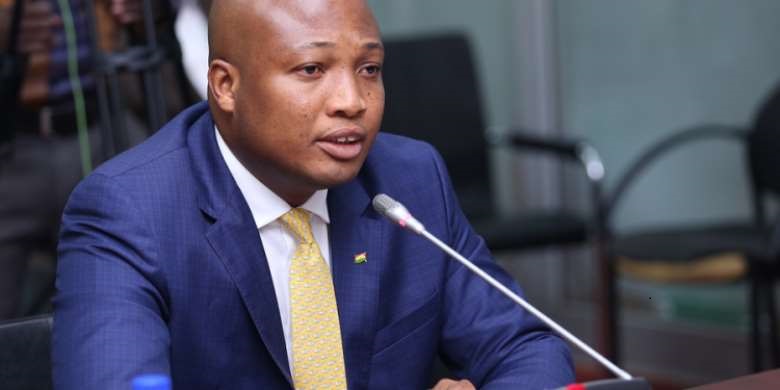 Speaking at a graduation ceremony at the University of Professional Studies, Accra (UPSA), finance minister Ken Ofori-Atta urged graduates to venture into entrepreneurship as the government could not afford to put them on its wage bill anymore.

“That payroll is full because we are spending some 60% of our revenue on remunerating some 650,000 people. That is not sustainable,” he disclosed.

The minister further indicated to the graduating students that, “you have the skills set to be able to do what you have to do. Our responsibility as a government is to create the environment and the macro stability, currency stability and ensure that you have access to the relevant skills and financing”.

But in an opinion titled “Beyond The Obnoxious E-Levy, A Hard And Frank Look At Public Expenditure”, Samuel Okudzeto Ablakwa mentioned that the government was planning to clandestinely recruit its party apparatchiks under the Office of Government Machinery (OGM).

“The staff strength at the Office of Government Machinery is projected to increase again to 2,111 from 1,597 in 2021. (See page 273 of 2022 Budget). This is curious considering that Finance Minister Ken Ofori-Atta had only recently told the Ghanaian youth not to put their hopes in public sector jobs as the public sector is bloated. It seems to me that caution doesn’t apply to party apparatchiks who will be engaged in 2022 to occupy the 514 spaces specially created at the OGM for them. Such policy duplicity does not help the credibility of government and it doesn’t help government’s expenditure control either”, he chastised.

In 2017, Yaw Osafo-Maafo, who is now a Senior Presidential Advisor, also said the Ghanaian economy as it is cannot support new employment opportunities in the public sector as it is choked.

Below is Okudzeto Ablakwa’s full statement:

BEYOND THE OBNOXIOUS E-LEVY, A HARD AND FRANK LOOK AT PUBLIC EXPENDITURE

As the dust settles on what appears to be a moribund E-Levy after the hugely unpopular tax policy crash-landed in Parliament on Monday, we must begin to pay considerable attention to government’s expenditure agenda as contained in the 2022 Budget.

The Akufo-Addo administration was expecting to raise some GHS6.9billion from the E-Levy. Even though many analysts say it was an ambitious projection that couldn’t have been met, it is not difficult to identify outrageous expenditure items that far exceed this revenue target and which can be shelved so that there will be absolutely no need for government to recycle the obnoxious E-Levy and re-present it in 2022.

Respectfully, my well considered suggestions on expenditure items that need to be cut are as follows:

1) The elephantine allocation of GHS3,130,633,000 to the Office of Government Machinery. This provision is almost half of the entire E-Levy projected collections. The OGM has been an unbridled tax guzzler under this regime. Adding over GHS450million to last year’s allocation in a period of pandemic recovery and austerity is extremely inconsiderate.

If allocation to the Health Ministry during a pandemic could be slashed by some GHS2billion compared with 2021 figures, there can be no justification for the self-serving lion share allocation to the OGM. All the suffering Ghanaian people ask, is for President Akufo-Addo to remember he once promised to protect the public purse and so needs to be faithful to Ghana’s Presidential Jet as his predecessors did, and desist from profligate and sybaritic charters of ultra-luxury US14,000.00 an hour executive jets. And if the President will lead by example as he calls on us all to burden share, the OGM certainly does not need this colossal GHS3.1billion allocation which consumes about half of all E-Levy expected revenues.

2) Approvals granted at page 291, Appendix 10C of the Budget document for the current Accra International Conference Centre to be razed down for the construction of a new edifice at a fantastic 116million Euros in an opaque non-competitive arrangement must be halted. Government claims we are in a period of austerity and yet its expenditure patterns are not consistent with their public pronouncements.

3) Prestige and sentimental projects such as approvals to construct a “Standard Stadium” each in Abuakwa South and Sunyani and then the construction of regional conference centres and theatres for creative arts contained at page 293 of the Budget, again do not reflect the times.

4) We need to have an objective discussion if considering current economic circumstances, we still need FIVE new university campuses for STEM? Can we not scale down to two or one and adopt an incrementalist approach when the economic horizon improves? Don’t forget double-track still plagues the education sector due to an acute lack of facilities.

5) It’s most surprising that an austerity Budget will contain approvals for fanciful projects such as: “Boankra Green Technology City and Tourism Village.” It appears the grotesque wish list has no end in sight.

6) As I made clear during the parliamentary debate on the estimates for the Ministry of Foreign Affairs and Regional Integration, the intention to establish new diplomatic missions in Trinidad and Tobago and Mexico could wait for better times in the future. In any case, we can learn from Mexico, Columbia, Chile and Peru who all share one diplomatic mission in Accra as members of the Pacific Alliance. It is time to rethink the old dinosaur framework for establishing physical diplomatic missions in favour of a more modern smart diplomatic presence.

7) Considering that there’s no allocation in the 2022 Budget for constructing the Keta Port, which cannot be argued against in a period of austerity, the logical consequence is to demand the termination of the ridiculous appointment of CEO of a non-existing port. That office remains an embarrassing drain of scarce taxpayer Cedis.

8)The staff strength at the Office of Government Machinery is projected to increase again to 2,111 from 1,597 in 2021. (See page 273 of 2022 Budget). This is curious considering that Finance Minister Ken Ofori-Atta had only recently told the Ghanaian youth not to put their hopes in public sector jobs as the public sector is bloated. It seems to me that caution doesn’t apply to party apparatchiks who will be engaged in 2022 to occupy the 514 spaces specially created at the OGM for them. Such policy duplicity does not help the credibility of government and it doesn’t help government’s expenditure control either.

The irony is that despite all the propaganda about E-Levy serving as the main funding source for YouStart – which is government’s flagship for job creation, Appendix 4C at page 252 reveals that government allocated only GHS385,088,000 as it expects Donor Partners to come up with a greater share of GHS614,912,000 to achieve its GHS1billion target. So this is a government that couldn’t dedicate GHS1billion for its grand job creation agenda as it depends on the benevolence of foreigners to help our youth find jobs, and yet it could allocate a similar amount of a billion for its use as contingency.

10) Finally, it is my considered view that Parliament can also make a contribution to the expenditure downsizing I advocate by reducing the scope and quantity of MPs constituency offices it intends to construct in all 275 constituencies over the next three years. Perhaps a sluggish 5-6 year arrangement with a reduced scope of works in installments beginning from the most far/hard to reach constituencies, preferably in the northern and Oti regions should be more appropriate. That will be a worthy contribution of the legislature towards frugality in a period of austerity and harsh economic conditions.

Clearly, if we get our priorities right by taking a hard and sincere look at public expenditure and eliminating blatant corruption, Ghana which according to World Bank data already has a high tax to GDP ratio of 12.2% compared with an average of 11.7% among our lower middle-income peers, we obviously wouldn’t need an obnoxious, divisive and regressive E-Levy.

Special greetings of the season.

May we use the many blessings God has endowed us with to transform our dear nation and bring happiness and empowerment to all.