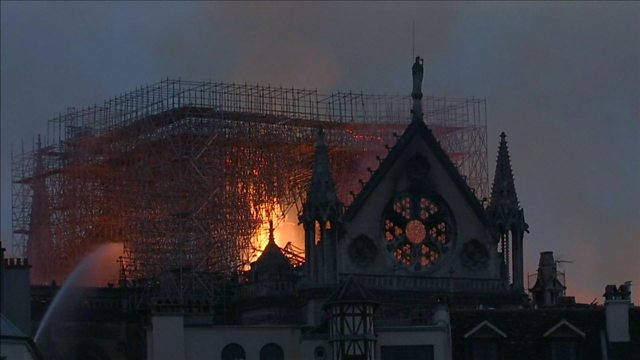 Hundreds of millions of euros have been pledged to help rebuild Notre-Dame after a devastating fire partially destroyed the French cathedral.

The fire, declared fully extinguished some 15 hours after it began, ravaged the 850-year-old building’s roof and caused its spire to collapse.

But firefighters who worked through the night managed to save the Paris landmark’s main stone structure, including its two towers.

The cause of the fire is not yet clear.

The Paris prosecutor’s office said it was currently being investigated as an accident, with officials saying it could be linked to extensive renovation works taking place.

Meanwhile, thoughts are turning to how the Catholic cathedral will be rebuilt.

French President Emmanuel Macron vowed to reconstruct the historic building even as the fire still burned, while two French business magnates had pledged about €300m ($339m; £259m) between them by early Tuesday.

Offers of help with the reconstruction have also poured in from around the globe, with European Council President Donald Tusk calling on EU member states to rally round.

The fire began at around 18:30 (16:30 GMT) and quickly reached the roof of the cathedral, destroying the wooden interior before toppling the spire.

Fears grew that the cathedral’s famous towers would also be destroyed.

But while a number of fires did begin in the towers, French Interior Minister Laurent Nuñez said they were successfully stopped before they could spread.

By the early hours of Tuesday, the fire was declared under control, with the Paris fire service saying it was fully extinguished by 10:00 local time (08:00 GMT).

What is the damage?

Search teams had already begun assessing the extent of the damage when dawn broke over the French capital. The cathedral’s blackened stone and charred scaffolding were revealed to onlookers for the first time.