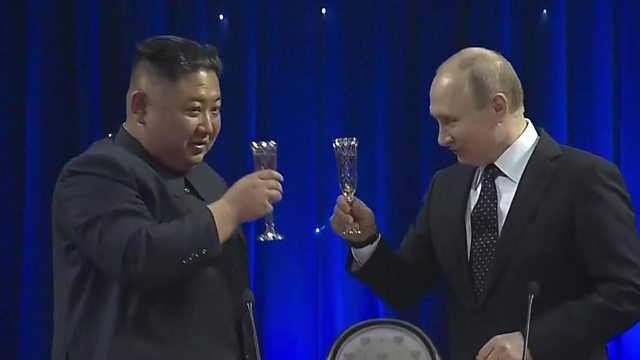 Such guarantees would need to be offered within a multinational framework, he added, following talks near Vladivostok in Russia’s far east.

Mr Putin said North Korea’s leader was “fairly open” and had “talked freely on all issues that were on the agenda”.

The meeting followed the breakdown of talks between the US and North Korea in February, when Mr Kim met US President Donald Trump in the Vietnamese capital Hanoi.

Those talks reportedly stalled over North Korea’s demand for full economic sanctions relief in return for some denuclearisation commitments – a deal the US was not willing to make.

Speaking after the talks on Thursday, Mr Putin said he wanted to see full denuclearisation on the Korean peninsula.

But he said this could only be achieved through respect for international law.

Mr Kim greeted Russian officials warmly when he arrived by train on Russky Island on Wednesday.

The North Korean leader was entertained by a brass band before he got inside a car flanked by bodyguards, who – in now familiar scenes – jogged alongside the vehicle as it departed.

What do we know about the summit?

According to the Russian presidential spokesman, Dmitry Peskov, the Kremlin believes the six-party talks on North Korea, which are currently stalled, are the only efficient way of addressing the issue of nuclear weapons on the peninsula.

Those talks, which began in 2003, involve the two Koreas as well as China, Japan, Russia and the US.

“There are no other efficient international mechanisms at the moment,” Mr Peskov told reporters on Wednesday.

“But, on the other hand, efforts are being made by other countries. Here all efforts merit support as long as they really aim at de-nuclearisation and resolving the problem of the two Koreas.”

What do both sides want?

This visit is being widely viewed as an opportunity for North Korea to show it has powerful allies following the breakdown of the talks with the US in February.

The country has blamed US Secretary of State Mike Pompeo for the collapse of the Hanoi summit. Earlier this month North Korea demanded that Mr Pompeo be removed from nuclear talks, accusing him of “talking nonsense” and asking for someone “more careful” to replace him.