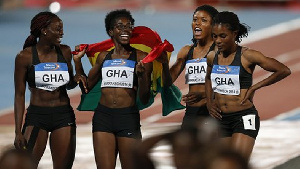 At the heart of the 2014 FIFA World Cup disgrace was a bonus row between players of the Black Stars, GFA officials and government entourage which included then Sports Minister Elvis Afriyie Ankrah and late Vice President Amissah Arthur.

In every disaster, there are lessons which are worked on to avoid a reoccurrence of same, but symptomatic of this country, not a single lesson appears to have been learnt from the 2014 World Cup debacle despite a Commission of Enquiry coming up with some quintessential recommendations to tackle perennial problems in our sporting sector.

Five years on from that unfortunate episode, Ghanaian athletes and players are still calling out government for delaying to settle their bonuses and per diems.


This is not the first and won’t be the last time players and athletes will have issues with the government and federations over per diems or bonuses.

In fact as far back as the 1970s, Black Stars players were threatening to boycott training and matches over unpaid bonuses.

This shows how the nation has consistently failed to address a problem that always brings it bad publicity.

Undoubtedly the biggest of all the scandals. It’s a huge story with so many subplots. Which one would you pick? The nation’s inability to agree on an amount with the players before the tournament? The decision to fly money to Brazil? Amissa Arthur’s failed promise? John Boye’s ‘you may kiss the cash’ episode or Sulley Muntari revealing his inner Azumah Nelson to fight a Management Committee member?

Till date it remains Ghana’s biggest disgrace but what birthed it was a dispute over appearance fee for the Black Stars players.

Players threatened to boycott their last group game against Portugal, which coerced the government into airlifting a whopping 3 million dollars to the players.

As usual, a commission of enquiry was set up to look into it. Interesting revelations were made, proposals were made by Justice Dzamefe and the other two members but it seems nothing was learnt from it.

The last time the President who used in his election campaign was asked about it, he gave an honest answer of ‘I have forgotten about the Dzamefe Commission report’.

Before the 2014 debacle was the 2011 All African Games disgrace. Ghana’s participation in the competitions was tainted by organizational challenges and a fiasco in accommodation, transportation, feedings, flights and games accreditation.

Athletes’ bonuses and per diems were also a major issue and once again there was a committee.

As to what happened to the recommendations of that committee, ‘only God knows’.

After winning gold at the 2012 All Africa Games in Congo, players of the national female team Black Queens took a decision not to leave their hotel until they receive their bonuses and per diems.

They eventually left the M-Plaza hotel where they were lodging after a promise by the government but as of 2018, players were still complaining about their unpaid bonuses.

Interestingly Asamoah Gyan, a private individual honoured his promise to the ladies while the government has shown no intention of paying the monies owed the players and the technical team.

John Mensah blocks GFA entrance to demand bonus John Mensah was regarded as a class act and calm figure in the Black Stars until he lost his cool in 2010.

The then skipper of the Black Stars blocked the entrance of the GFA with his black 4×4 cross country vehicle to register his protest over unpaid bonuses.

The incident happened at a time that the GFA General Secretary, Kofi Nsiah and president, Kwesi Nyantakyi together with the Minister of Youth and, Sports, Akua Sena Dansua, were at the M-Plaza Hotel, meeting with the national Under 20 female team, Black Princesses, who had just returned from their World Cup campaign in Germany.

The 2019 World Athletics Championship ended with Ghana winning zero medals. Expectations were high that the men’s relay team would replicate their feat at the African Games on the world stage however, the quartet failed to go beyond the heats.

Once again it is the off-field issues that have taken centre stage now. Sprinter Flings Owusu Agyapong has disclosed that the athletes are yet to receive their per diem from the Sports Ministry.

However sources at the Sports Ministry say the Minister who just returned to Accra from a tour, is doing his best to have the monies delivered to the athletes.

The local component of the Black Stars who have made it to the finals of the 2019 WAFU Nations Cup are also making similar demands.

lodging his protest over unpaid bonuses, when he blocked the entrance to the Ghana Football Association (GFA) with his black 4×4 cross country vehicle, with registration number GE 1000 Y for well over 45 minutes, a situation that prevented vehicular movement to and from the GFA premises.