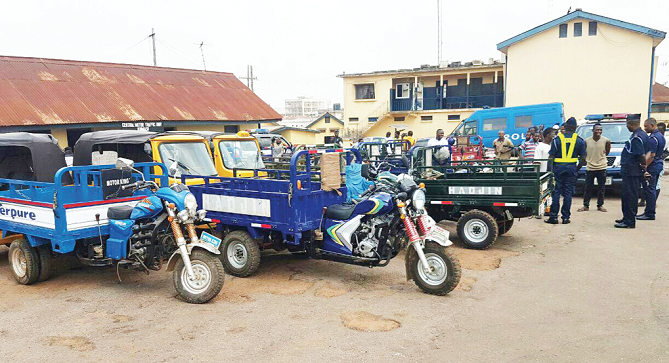 From November 1, this year, tricycles, popularly known as “aboboyaa”, will not be allowed to operate on highways and major roads in the Greater Accra Region, including the Accra-Tema Motorway.

The Greater Accra Regional Minister, Mr Henry Quartey, who announced the directive at the launch of the Operation Clean Your Frontage in Accra last Friday, said, however, the ban on tricycles plying the Accra-Tema Motorway took immediate effect.

He said the tricycles would be restricted to their registered metropolitan, municipal and district assemblies (MMDAs).

A one-week grace period would be given after the creation of public awareness by the assemblies, the regional minister added.

Mr Quartey noted that the measure was part of the Greater Accra Regional Coordinating Council’s (GARCC) moves to ensure sanity on the roads.

In line with that, the GARCC was liaising with the Driver and Vehicle Licensing Authority (DVLA) to set up zonal registration centres in the assemblies to register all tricycles operating in the region.

The ban is in line with the road traffic regulations banning the use of tricycles, popularly known as “aboboyaa” on highways and principal streets.

Regulation 128 (1-4) of the Road Traffic Regulations 2012, states inter alia that: “The licensing authority shall not register a motorcycle to carry a fare-paying passenger.”

Mr Quartey said tricycles and motorcycles were causing a lot of nuisance on the highways and other major roads in the region.

Already, there had been a series of meetings with the heads of the tricycle operators to sensitise them to the new policy, he added.

Also, he instructed that no motorcycle should carry more than two persons, while riders and pillion riders must wear helmets.

Mr Quartey further indicated that as part of efforts to reduce cases of robbery in the region, the RCC was collaborating with the Ghana Police Service to clamp down on all unlicensed motorcycles and also regularise their operations.

“It is my fervent hope that at the end of the day we would have a cleaner Accra and healthier residents, enforcement of law and order, decongested streets with better traffic flow; traders selling at designated places and more disciplined residents.

Prior to the development of the new policy, the GARCC, in August, this year, met stakeholders from sectors including the Transport Unions, Ministry of Roads and Highways, Waste Management Service Providers, Ghana Union of Traders Association and to draw conclusions for a bye-law that will revive and ensure strict compliance and enforcement of the regulations.

A statement signed by Management of the CCMA, said the directive which was “provided by law” and other related directives, were taken at a meeting of the Cape Coast Metropolitan Security Council on September 15, this year.

The CCMA also restricted their movement, saying, “Unregistered tricycles and unlicensed riders are banned from operation. All tricycles are restricted from using the Accra-Takoradi Highway and their operations should be between the hours of 6 a.m. and 5 p.m. daily only.”

The Operation Clean Your Frontage makes it mandatory for property owners of residential, private and public institutions and the citizenry to clean and green their frontage and all open spaces around their property.

Already bye-laws for the enforcement of the campaign have been passed, officers employed and trained to enforce those laws including arrest and prosecution but a moratorium of two months has been put in place for public education before enforcement of the laws.

Waste management company, Zoomlion Ghana Limited, which is the lead partner of the initiative, is providing 1,000 containerised motor tricycles and 58 compactors to be distributed to the 29 metropolitan, municipal and district assemblies (MMDAs) in the region to support the project.

The equipment and logistics were all on display at the event ground.

Among other things, the initiative would also include the deployment of City Response Team, evacuation of accumulated refuse at sanitary sites and other locations, transfer stations in MMDAS, daily sweeping of streets, curbs, walkways, and open spaces and picking of litter from walkways, road medians and open spaces, which would be executed by Zoomlion Ghana Ltd and other partners.

The Executive Chairman of the Jospong Group of Companies, Mr Joseph Siaw Agyepong, indicated that the campaign would ensure the citizenry clean their surroundings while service providers would take care of domestic waste collection, street cleansing and other public areas.

Since the beginning of its operations in 2006, he said the company had been making tireless efforts at educating the public as well several other initiatives to get people to take responsibility for their health and wellbeing through safe and sound environmental practices.

Through such an effort, Mr Agyepong said the company discovered that attitudinal change and enforcement of bye-laws were the two key challenges inhibiting a sustainable clean and healthy environment.

“I would like to encourage all Ghanaians to take advantage of this laudable initiative to clean their frontage to ensure that we, in our own small ways, also play our part in making Ghana a clean and health country,” Mr Agyepong said.