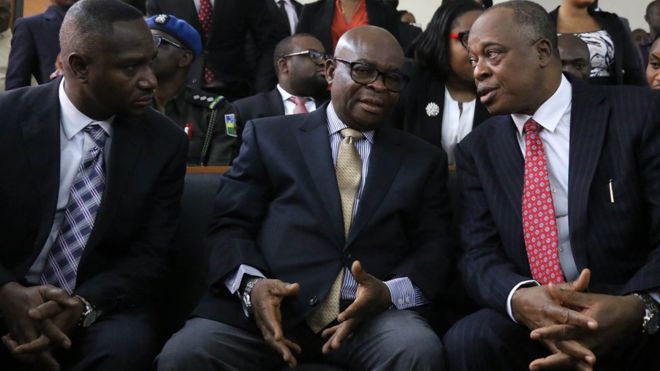 Nigeria’s Chief Justice Walter Onnoghen has been convicted of falsely declaring his assets.

His suspension over the charges by President Muhammadu Buhari in January, weeks before the presidential election, caused a political storm.

Mr Buhari was accused of meddling with the judiciary in case the outcome of the election was challenged in court.

Justice Onnoghen was found guilty of hiding the extent of his wealth and has been banned from office for 10 years.

The case was heard by the Code of Conduct Tribunal, which was set up to tackle corruption allegedly committed by public officials.

The law requires senior civil servants and government officials to declare their assets before taking office as a way to monitor corruption.

Mr Onnoghen has not commented on the tribunal’s ruling.

His conviction is unprecedented as he was the first serving chief justice to be put on trial and found guilty, the BBC’s Chris Ewokor reports from Nigeria..

In January, Atiku Abubakar – the president’s main challenger in the election – called Justice Onnoghen’s suspension “an act of dictatorship”.

At the time of his suspension, Mr Buhari’s spokesman said that trying to link it the elections was “illogical”.

The president has pledged to fight corruption and was re-elected in February.

Mr Abubakar has gone to court to challenge the result of the election.