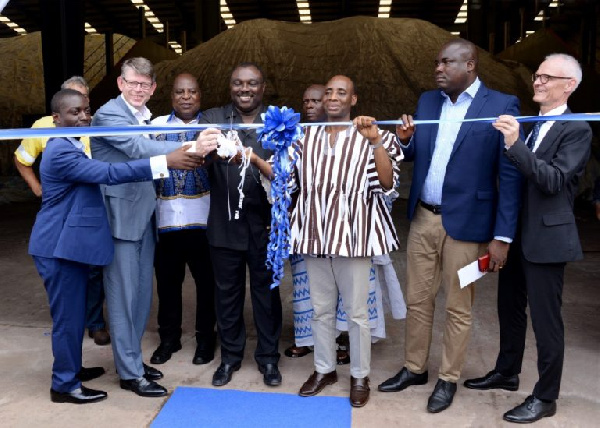 Leading fertilizer company, Yara International ASA has provided a landmark for Ghana’s agricultural sector by opening its US$15 million fertilizer terminal at Tema. The new facility is being seen as one of the most important pivots in Ghana’s efforts to dramatically increase agricultural productivity and fully exploit the country’s huge but grossly under-utilized agricultural resources.

The new facility takes Ghana a major step forward towards fulfilling its ambition of completely made in Ghana fertilizer, an aspiration now made all the more important by government’s gradual withdrawal from providing subsidized fertilizer to the sector.

Deputy Minister of Trade and Industry, Robert Ahomka-Lindsay who was the special guest at Wednesday’s facility commissioning ceremony submitted Ghana remains an agrarian economy despite efforts at becoming an industrial one. He expressed delight with Yara Ghana’s investment saying it would boost the drive to be food sufficient as well as help raise crops which will feed factories advancing the industrialization agenda.

“The current state of our agriculture cannot sustain the thirty million citizens we have. It is why we seek the industrialization of the economy but industries need raw materials to operate and with Yara Ghana’s agriculture input and new terminal, it will contribute to efforts of mechanizing agriculture,” Ahomka-Lindsay stated.

He revealed that out of about 300 businesses that have been vetted under the One District One Factory (1D1F) about 45% of the businesses are agro based and so the cultivation of the crops to be processed by the factories is crucial to the success of the country’s flagship industrialization initiative. This makes the new fertilizer terminal itself crucial.

Yara has applied to be admitted under the One District One Factory (1D1F) programme.

Managing Director of Yara Ghana, Mr. Danquah Addo-Yobo underscored the company’s commitment to the positive transformation of agriculture in the country stressing for over eleven years Yara Ghana has been the leader in supply of fertilizers to the country’s agricultural sector.

The Yara Ghana head explained that although the global fertilizer company funded the US$15million terminal without governmental intervention, it applied to be part of the One District One Factory (1D1F) programme to enjoy tax relief from the government.

Yara Ghana has a firm presence in the country with its 300 distributors nationwide.

According to the Ghana head, the new fertilizer terminal has the capacity to produce 50,000 tonnes translated to 1 million bags storage capacity while blending and bagging of 2000 fertilizer bags can be done every hour noting the inaugurated facility will serve the interest of farmers, businessmen, bankers, and other related parties.

Executive Vice President of Yara, Terje Knusten intimated the investment in the fertilizer terminal gives Yara “more capacity to support the government to improve farming via the ‘Planting for Food and Jobs’ Programme.

The new terminal will improve logistical operations; facilitate the ready supply and availability of its premium crop nutrition solutions to Ghanaian farmers.