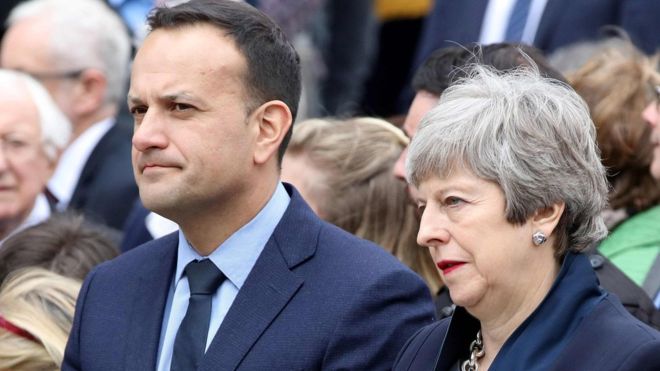 Earlier this week, the two premiers attended the funeral of Lyra McKee.

At the funeral, priest Fr Martin Magill asked why it had taken her killing to unite politicians in Northern Ireland.

This was followed by a series of calls for a fresh round of talks, aimed at reviving the power-sharing government at Stormont.

Northern Ireland has been without devolution since January 2017 when Sinn Féin collapsed the coalition government in protest at the DUP’s handling of a green energy scandal.

Since then, several rounds of talks aimed at restoring the Northern Ireland Assembly have failed, with the two parties failing to find a compromise on a number of outstanding issues including Irish language rights and the legalisation of same-sex marriage.

In their statement, Mrs May and Mr Varadkar said: “In coming together with other political leaders in St Anne’s Cathedral to pay tribute to Lyra McKee, we gave expression to the clear will and determination of all of the people of these islands to reject violence and to support peace and a better future for everyone in Northern Ireland.”

It added: “The aim of these talks is quickly to re-establish to full operation the democratic institutions of the Belfast/Good Friday Agreement – the NI executive, assembly and North-South Ministerial Council – so that they can effectively serve all of the people for the future.”