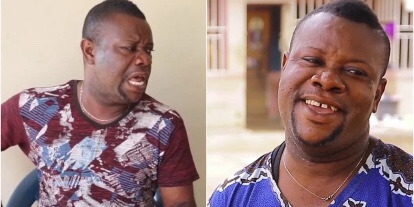 Nana Yeboah finally met his meter in the studious of GhPage media after self-made Oseikrom president, Adu Flatelo, tried to mercilessly beat him for allegedly backbiting him in the showbiz industry.

According to Adu Flatelo whose temper had risen to its greatest degree, Nana Yeboah blatantly lied behind his back to some industry persons that he slept at the trains station during his stay abroad.

Angry Adu Flatelo went on to assert that Nana Yeboah falsely told some people that he returned to Ghana empty-handed because of his reckless lifestyle overseas.

If not for the timely intervention of some people who were present at the scene, the two would have exchanged heavy blows like boxers.

Check out the video below to know more…