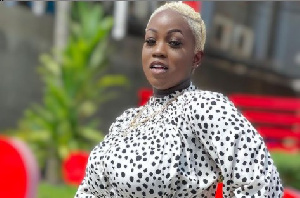 The Ghanaian singer based in Germany, Kimmy, has revealed that her dream has always been to make music.

According to the artist, music has always been her passion since childhood. She still told people around her as a young girl that she was going to be a singer.

“Music is something for which I have always had a passion, but no one understood me,” she said.

She said, “For me, it was something I always wanted to push through because there were so many times I could have fallen out,” talking to Foster Romanus on the Late Nite Celebrity Show. I may have chosen not to continue on this road, but those were the things that pushed me more and kept me going even further.

Since this was what she wanted to do, Kimmy also added.

She commented, “I put my last cent into it and used everything I had to go to the studio to push my music and succeed.”

“Asked what kind of music she puts herself under, she said, “You can put me in the category of Afrobeat and various categories of Afro beats because in Afro beats I carry a piece of everything.

She asked fans to look out because “I’m going to come out with a whole new music vibe.”