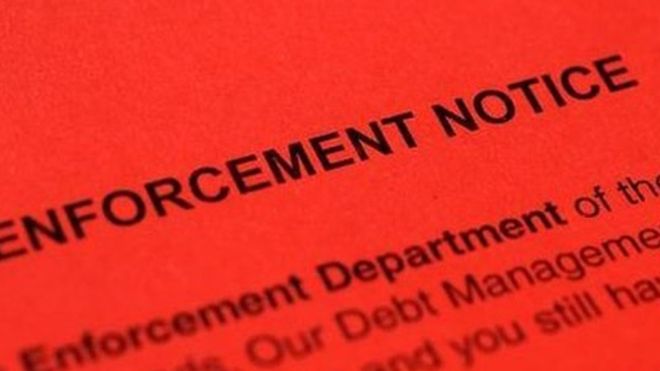 MPs have said bailiffs should be regulated to stop them breaking rules and even the law to collect debts.

It follows a dramatic rise in cases of bailiffs using intimidating behaviour, threatening to break into homes and in some cases, unlawfully doing so.

The Parliamentary Justice Committee says a regulator is needed to ensure that people in debt are treated fairly.

Justice Committee chairman Bob Neill said: “We were surprised that no regulator is already in place.

“The system is confusing, particularly for the most vulnerable people in society. Complaints are important and must be investigated properly.”

The committee calls the existing system in England and Wales of individual certification “a rubber-stamping exercise”.

Mr Neill said: “We’re calling on the government to consult on whether new powers should sit with an existing body or a new one, and how it should be funded.”

In the year to March, Citizens Advice saw a 16% increase in bailiff-related issues from last year and helped 40,000 people with almost 104,000 bailiff problems.

The charity highlighted bailiffs refusing to set up offers of affordable payments, charging excessive fees and misrepresenting their rights of entry.

Of all the people it helped with bailiff issues, 60% were female, 35% were either disabled or had a long-term health condition and of those, 11% had a mental health condition.

Mr Guy said: “It’s excellent to see MPs from across all parties call for a regulator to crack down on the bailiff industry. They’ve also rightly called for a complaints process to be established, so problems are dealt with independently of the bailiff industry and outside the court system.

“All eyes will now be on the Ministry of Justice, which must introduce these reforms as a matter of urgency.”

In November, the Civil Enforcement Association which represents civil enforcement agencies operating in England and Wales responded to Citizens’ Advice’s report that called for tougher regulation. Chief executive Russell Hamblin-Boone said: “It is of great concern that Citizens Advice fails to make a distinction between laws that are broken and laws that people simply don’t like.

“For example, in the [Citizens Advice] report it is assumed that a threat to force entry to a property or to remove goods required for work purposes is breaking the regulations. That is simply incorrect and depends on the circumstances. It is shocking that agents are being accused of acting illegally based on such flimsy evidence.”

Peter Tutton, head of policy at StepChange debt charity, said: “Enforcement by bailiffs is intrusive and places disproportionate costs on people in the most vulnerable circumstances.

“It is also key that the committee have recommended oversight of the fees charged by bailiffs to ensure these are proportionate and just.”