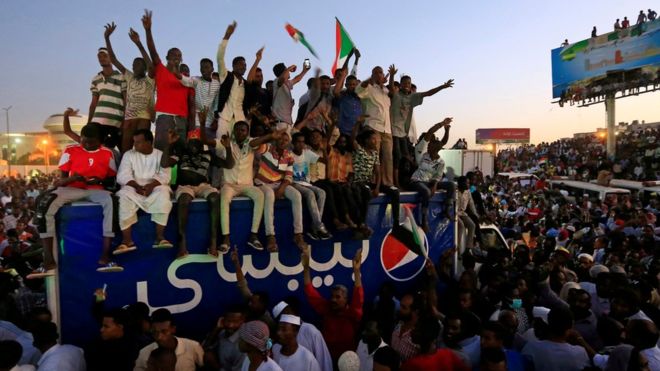 Sudan’s military government has told protesters to take down their road blocks in the capital, Khartoum.

Demonstrators have been manning barricades leading to the military HQ, which has been the focus of the protests that helped lead to the ousting of President Omar al-Bashir.

On Sunday, protest leaders said they had ended contact with the military council that removed the president.

They accused it of being composed of “remnants” of Mr Bashir’s regime.

The military says it is committed to handing over power and will consider a joint military-civilian council.

But it insisted that it was responsible for security in the country.

“It can’t continue like this,” said the head of the military council, Lt Gen Abdel Fattah Abdelrahman Burhan.

It was not clear if the protesters would respond to the call.

“We will carry on manning the checkpoints as usual,” 23-year-old demonstrator Kawthar Hasaballah told AFP news agency. “No one, not even the military council, will remove us from our places.”

A mass sit-in outside the military HQ has been taking place since 6 April. Five days later Mr Bashir was overthrown and replaced by a military council that promised it would hand over power to civilians within two years.

Leaders of the protest movement have suspended talks and co-operation with the military. There had been hopes that the talks would lead to civilian rule.

A spokesman, Mohamed al-Amin, called the military council an extension of the old regime and said they no longer recognised it, adding that a civilian administration would be unveiled in the next couple of days.