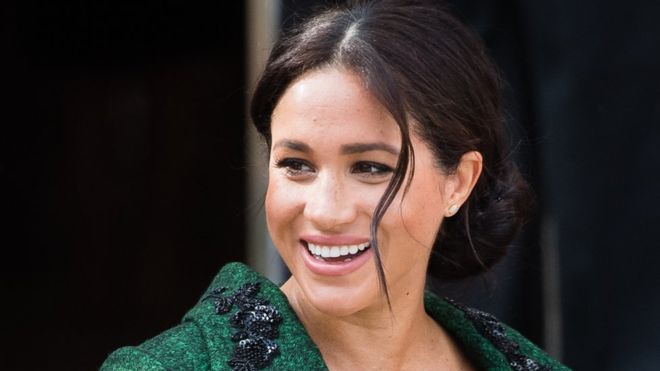 The Duchess of Sussex has been praised as an “inspiration” for young people by the Commonwealth’s secretary-general.

Baroness Scotland said the duchess was a “vibrant, professional woman” who was dedicating herself to public service.

She said many people in the 53-strong group of nations were “very excited” about Meghan’s mixed-race background.

The Duke and Duchess of Sussex both had “such a deep interest in young people… and they love to see them”, Baroness Scotland added.

She said the “young, committed” couple’s promotion of learning and development issues was an “inspiration for many of those young people”.

Calling the former actress “a great example”, Baroness Scotland said: “Our Commonwealth is very, very mixed but as someone said to me lots of people are getting very excited about the fact the duchess is mixed race.”

And she agreed with the suggestion citizens from the Commonwealth’s culturally diverse 2.4 billion population would say Meghan “looks like me”.

But while the US-born duchess’s background would be relevant to many across the globe, she also stressed she was not the first mixed-race member of the British monarchy.

Baroness Scotland, who was herself born in the Commonwealth country of Dominica and brought up in the UK, was being interviewed by the Press Association to mark the family of nations’ 70th anniversary.

It is thought Queen Charlotte, wife of George III, was of African descent and she has been described as Britain’s first black queen.

Meghan, who is due to give birth to her first child in the next few weeks, has taken on the role of patron of the Association of Commonwealth Universities and is vice president of the Queen’s Commonwealth Trust.

Prince Harry is the trust’s president and the Commonwealth’s youth ambassador.

The Queen heads the Commonwealth and Baroness Scotland said she had been a passionate supporter, adding that it had benefited from “her wisdom, her support, and her total lifelong commitment”.