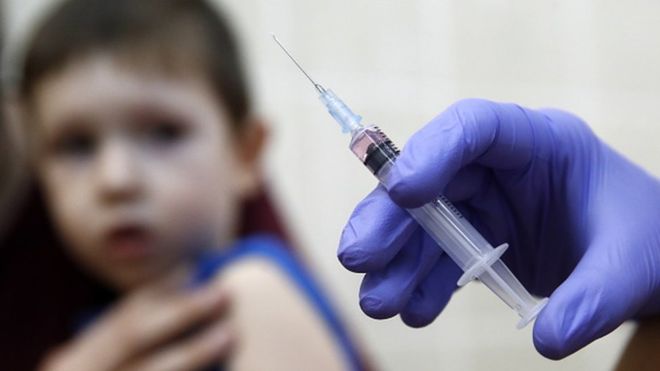 The number of measles cases reported worldwide in the first three months of 2019 has quadrupled compared with the same time last year, according to the World Health Organization (WHO).

The UN body said provisional data indicated a “a clear trend”, with all regions of the world seeing outbreaks.

Africa had witnessed the most dramatic rise – up 700%.

The agency said actual numbers may be far greater, since only one in 10 cases globally are reported.

Measles is a highly infectious viral illness that can sometimes lead to serious health complications, including infections of the lungs and brain.

Ukraine, Madagascar and India have been worst affected by the disease, with tens of thousands of reported cases per million people.

Since September, at least 800 people have died from measles in Madagascar alone.

Outbreaks have also hit Brazil, Pakistan and Yemen, “causing many deaths – mostly among young children”, while a spike in case numbers was reported for countries including the US and Thailand with high levels of vaccination coverage.

The UN says the disease is “entirely preventable” with the right vaccines, but global coverage of the first immunisation stage has “stalled” at 85%, “still short of the 95% needed to prevent outbreaks”.

In an opinion piece for CNN, WHO head Tedros Adhanom Ghebreyesus and UNICEF head Henrietta Fore said the world was “in the middle of a measles crisis” and that “the proliferation of confusing and contradictory information” about vaccines was partly to blame.