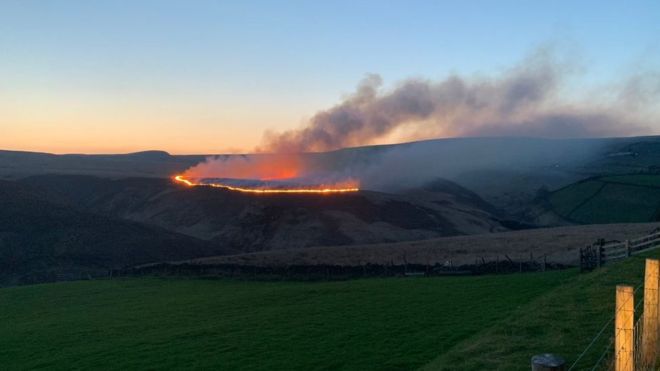 A second blaze has broken out on moorland in West Yorkshire on one of the hottest days of the year.

The fire at Marsden Moor started on Sunday and was “likely” to have been caused by a barbecue at Easter Gate, the National Trust said.

It has now spread to Denshaw in Saddleworth, Greater Manchester, the fire service said.

Firefighters also remain on Ilkley Moor damping down a blaze which spread over 25,000 sq metres on Saturday.

The National Trust said the Marsden fire, which started at about 19:00 BST, was the sixth on its moorland this year and covers about 3 sq km of land.

The last significant fire was on 27 February, with four separate smaller fires reported since.

The trust’s Marsden branch said the moor was a designated Site of Special Scientific Interest, a Special Protection Area and a Special Area of Conservation due to the ground-nesting bird population and blanket bog habitat.

It said a helicopter had been deployed since 09:00 BST to take water from nearby reservoirs to the fire.

“At present it is estimated that an investment of more than £200,000 in restoring this special habitat has been lost,” the trust said.

“The deployment of the helicopter itself costs the trust, a conservation charity, £2,000 per hour.

“We’re devastated to see the destruction caused. Please help us protect the moors and wildlife by calling the fire brigade immediately if you spot any signs of fire.”

Three men were arrested on Sunday over the Ilkley Moor fire but two were later released pending further investigation.

One man has been since charged with arson.

West Yorkshire Fire and Rescue Service tweeted that people were still being seen lighting barbecues on Ilkley Moor, despite the fire continuing to burn.

It said it was working with police and Bradford Council to deal with the issue.

It said on its Facebook page: “If you live around Stalybridge, Oldham or Rochdale and can smell the smoke please keep windows and doors shut as a precaution.”

Bradford Council has warned people to stay away from Marsden Moor while the fire is being dealt with.