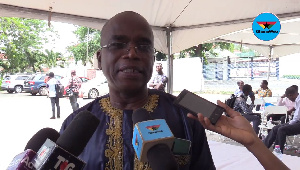 The NMC boss made the remark at the inauguration of the new Board Members of GBC on Wednesday as the NMC position on the saga which denied GBC the right to cover the Ghana Premiership live.

His call has come in the wake of what has become a public feud between the local football regulatory body and the state broadcaster over television rights of the 2019/20 Ghana Premier League which was awarded to StarTimes.

GBC cried foul after StarTimes was announced as winners of the bid, insisting it was given a raw deal but the FA responded with its statement exposing details of the GBC deal which demanded 30% share from any headline sponsorship from the FA.

The FA statement also indicated that the GBC bid was received after the deadline for submission.

That notwithstanding, Mr Boadu-Ayeboafo pointed out that since the FA publicised the bid of GBC in an attempt to purge itself, it would be fair if the GFA also make public the content of the StarTimes proposal.

That, he explained, would put members of the public in a better position to make an informed decision on the issue.

He said the stance of the GFA denoted an imperialist motive since GBC as a national asset would have been well positioned with the logistics at their disposal to serve Ghana better by beaming the matches across the nation on their various media platforms.

Mr Boadu-Ayeboafo said since StarTimes has been awarded the contract, the NMC fully supports the directive issued by the Director-General of GBC barring its personnel from working for StarTimes to cover the matches.

He warned that any staff of GBC who flouts the directive would be dealt with and would face sanctions.

Mr Boadu-Ayeboafo asked GBC to have a new paradigm shift by ensuring that any live coverage they undertake was negotiated on the basis of value for money.