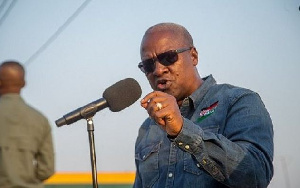 The flagbearer of the opposition National Democratic Congress (NDC), has once again criticized the elephant-size government of President Akufo-Addo, saying his successor can do away with 40 ministers, if he is committed to his campaign to protect the public purse by having a lean government.

According to ex-President John Dramani Mahama, unlike President Akufo-Addo, he is committed to drastically reduce the number of ministers by reemerging some of the “unnecessary” ministries, for the avoidance of duplication and inefficiency.

Speaking at a programme to launch digital platforms to raise funds for the party’s 2020 campaign in Accra yesterday, Mr Mahama, reiterated his promise to make a clear departure from the current system by running a lean government to cut down cost, prevent waste and boost efficiency.

He pledged to remerged three ministries;the Ministry of Aviation, Ministry of Railways and Transport, which used to be part of the Transport Ministry, run by Dzifa Ativor and Joyce Bawa Mogtari as Minister and Deputy respectively.

“There’s the need to cut out waste and ostentatious government. And I wish to reiterate that position to reaffirm my decision to reduce drastically, the number of Ministers and Ministries and just to cite a few, the Ministry of Aviation, Ministry of Railways and Transport, will be remerged into one ministry, adding “this was a ministry that was previously manned by two women and yet, they did more in the area of transport than three ministries manned by six ministers”.

One of the most criticized ministries; the Sanitation Ministry, headed by Madam Cecilia Dapaah, Mr Mahama said, will also remerged with the Local Government and Rural Development Ministry, to serve the same purpose while ensuring that, Procurement, Business Development, Special Initiatives, Monitoring and Evaluation and others are all yanked off.

As I said, President Akufo-Addo, can disperse with more than 40 ministries and he will not make any difference with the lackluster performance”, he lashed out.

The President, has been criticized heavily for running a very large government in excess of 123 ministers, earning the unenviable title of the President with largest number of ministers.

The former President, who made public several policy decisions to be contained in the “People Manifesto 2020” to be pursued in the event that the NDC is able to wrestle power from the governing New Patriotic Party (NPP), pledged to lead a government of “integrity”, “dignity”, honesty” and “truth”.

Mr Mahama, described as regrettable, the abysmal performance of the Akufo-Addo government, saying though it has “Benefitted so much”, it has “Shown so little”.

He went on to accuse the NPP government for massaging the economic figures just to look better, saying “they are skewing the books to show economic numbers thatare better than the reality”.

According to the former President, he is committed to lead a government that will work to ensure every Ghanaian benefits from the resources of the country, instead of the present dispensation of “nepotism” where few people in a “systematic” and “state capture” agenda, are looting from the people.

“Ghanaians look forward to the NDC stepping up to the plate and rescuing power from this government that promised so much, but has delivered little.
a government that said it will provide inclusive government, but has practiced the worse form of nepotism”.

Mr Mahama, said his successor has managed to divide the country like never before and deprived a good number of Ghanaians their sources of livelihood with the collapse of banks and other financial institutions in the name of financial sector clean up.

In his view, the government should have implored different measure to “cost effectively” resolve the sector’s so-called challenges.

He went on to accuse President Akufo-Addo of presiding over a government that is intolerant of opposing views, intimidating and gradually introducing the “culture of silence” while ensuring the closure of opposition media stations.

On education, the former President, promised to complete all the abandoned 200 Community Day Senior High Schools (SHS), started during his first term, increase the teacher-student contact hours and even do more to improve the educational standard.

He also promised to abolish the double track system, a part of the free SHS programme, adding his government will not engage in the ridiculous suggestion to buy past questions for final year SHS students.

Aside additional senior secondary schools, Mr Mahama, further promised to build a new university in one of the six newly created regions with campuses in the rest, while making vocational and technical education free.

He said, a future NDC administration, will reintroduce the automatic promotion for teachers, and reiterated his pledge that an NDC government under his leadership, will cancel the controversial teacher licensure exams.

“They say that we introduced the licensure exams; to be clear we never sort to use exams as a means of licensing teachers,” he said.

Launching the digital campaign aimed at getting NDC members, sympathizers and admirers to help finance the party ahead of the December polls, Mr Mahama assured them that the NDC would protect every donor, especially those from the business community who wish to contribute to the party’s campaign, but are scared of the “vengeful” nature of the Akufo-Addo government.

He asked them not to hesitate, as they can be assured of privacy.

“Those of you in the business community who want to contribute because of the vengeful nature of this current administration, we’ll protect your identity,” he said.

Both supporters and members of the party, according to the initiative, are required to download a special application on play store on their mobile phones to enable them easily contribute.

As part of the initiative, members of the party, are also required to adopt and contribute funds through their respective branches and constituencies, in order to ease the financial burden of organising a national campaign on national executives and flagbearer. He advised party members to stop following him and work in their various Constituency.