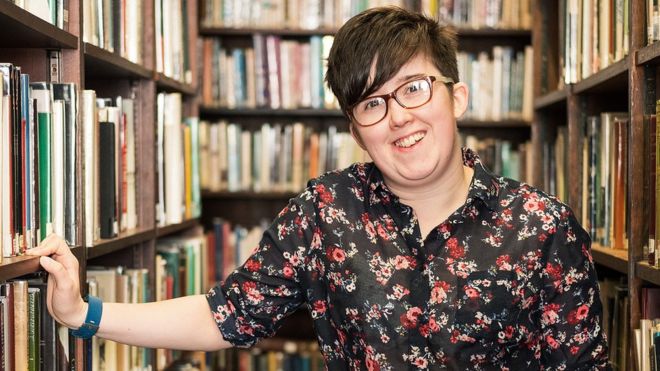 A journalist who was shot dead during rioting in Northern Ireland had her dreams “snuffed out by a single barbaric act”, her partner has said.

Lyra McKee, 29, was struck by a bullet as she was observing the violence in Londonderry on Thursday night.

Police have started a murder inquiry and are blaming dissident republicans for the killing.

At a vigil in Derry, Sara Canning said she had been left without “the woman I was planning to grow old with”.

She described her partner as a “tireless advocate and activist” for the LGBT community.

“The senseless murder of Lyra McKee has left a family without a beloved daughter, a sister, an aunt and a great-aunt; so many friends without their confidante,” added Ms Canning.

“We are all poorer for the loss of Lyra.”

The rioting that led to Ms McKee’s killing began in Derry’s Creggan area after police carried out searches for weapons and ammunition.

A masked gunman fired shots at police officers at about 23:00 BST and the journalist, who was standing near a police 4×4 vehicle, was wounded.

Hundreds of people attended a vigil on Friday afternoon at the scene of her murder.

One of Ms McKee’s close friends, who went to the hospital where the journalist was taken after the shooting, told BBC News NI: “You never think you’re going to get a phone call to say one of your good friends is shot.

“We are a small group of friends and one of us is now gone.

“Lyra was a voice – she wasn’t afraid to stand up and hold her view.

“Lyra managed to get [Sinn Féin leader] Mary Lou McDonald and [Democratic Unionist Party leader] Arlene Foster into Creggan [for the vigil] without any high security or barricades.

“Those politicians stood amongst us today and that really is the power of Lyra.”

Books of condolence have been opened in Derry and Belfast and other vigils have been planned.

Irish President Michael D Higgins signed the condolence book at Belfast City Hall and spoke of the “outrage” in Ireland at the murder.

“The loss of a journalist at any time in any part of the world is an attack on truth itself,” he said.

“The circumstances in which it happened – the firing on a police force that are seeking to defend the peace process – cannot be condoned by anybody.”

The Catholic Bishop of Derry, Donal McKeown, said the people of the city would “come together at this time to make clear our conviction that violence solves nothing”.

“This Good Friday there is a deep air of sadness hanging over this city,” he added.

Leading figures from the worlds of politics, journalism, activism and beyond have united to condemn Ms McKee’s murder.