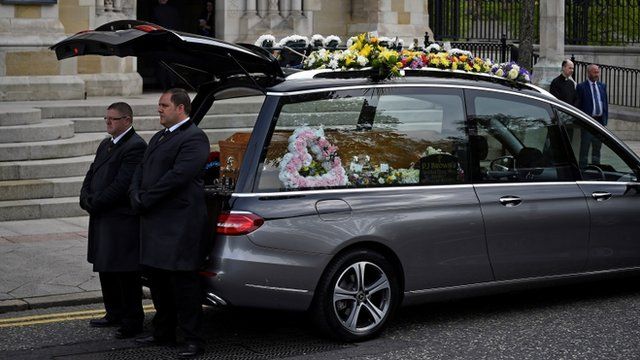 The funeral of Lyra McKee is taking place in Belfast.

There was an applause as Ms McKee’s coffin entered St Anne’s Cathedral.

Ms McKee, 29, was shot dead on Thursday while observing rioting in Londonderry. The New IRA said its members killed her.

Also at the service is the clergyman who witnessed IRA decommissioning, the Rev Harold Good.

Many friends of the journalist are wearing Harry Potter-themed T-shirts, scarves and badges to the funeral service at St Anne’s Cathedral. Ms McKee was an avid fan of the series.

St Anne’s Cathedral represents the old and new Belfast. The building dates back more than 100 years to before Irish partition.

It is also where Edward Carson, one of the founders of Ulster unionism, is buried.

In more recent years, a chapel of Christian unity was built inside. It contains a symbol of the World Council of Churches and the Greek word ‘Oikumene’ meaning ‘the whole inhabited world’.

Three people have been arrested over the murder, and all have been released without charge.

Fr Joe Gormley, who anointed Ms McKee after she was shot dead, told BBC News NI there was still a “great deal of shock” in Derry.

“But people are also reflecting and they know that we are faced with a choice in life,” he said.

“We either go back to the dark days or move forward.”

He said he was willing to “sit down and talk” to those responsible.

Fellow members of the National Union of Journalists (NUJ) are to form a guard of honour at the cathedral.

The union described Ms McKee as “one of the most promising journalists” in Northern Ireland.

There has also been a gathering at Guildhall Square in Derry for those who could not attend her funeral.