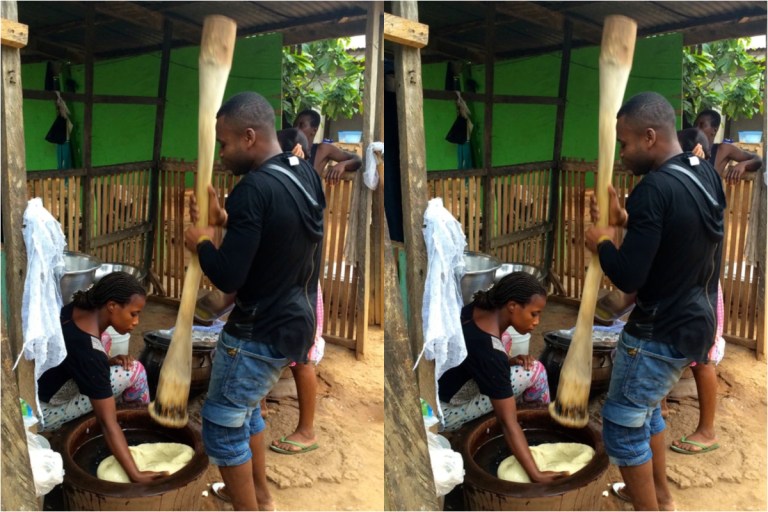 The nosedive plunge Kumasi-based local movie industry, kumawood faced has made some of the actors to resort to different ways and means to fend for themselves.

Kumawood actor, Stephen Okyere better known as Kokotii shot into the limelight in early 2000’s when he featured in films such as Mabre Mo, Abusua Apam and Efie Nipa.

Most of the Kumawood actors have ventured into other businesses to keep them afloat but not all of the actors were fortunate with the sudden switch. Kokotii, after the fall of Kumawood, decided to establish an eatery that serves local delicacies like Fufu his hometown in Agona.

From the photo obtained, the actor could be seen grabbing the pestle as he helped out the lady stirring up the plantain and cassava in the mortar.

The photo has since sparked some mixed reactions on social media as some netizens were of the view people need to save their money well in order to never be in financial need.

In other news, Ghanaian entertainer and DJ, Fred Kyei Mensah has opined that Keta Senior High Technical School Star girl, Francisca Lamini shouldn’t have declined the sweet deal she had from the sponsors of the NSMQ to take her to Dubai for the sake of her colleagues.

According to Fred Kyei Mensah, he recognizes the demand on Francisca to demonstrate her love to her friends but she should be pragmatic in some of her actions since life goes on after the NMSQ 2021.

Fred explained that it is an error in judgment on her part, to refuse the offer, even though it is her own decision.   She wasn’t initially included in the winners’ package, but her outstanding performance at the NSMQ won her that honor.

Francisca Lamini could have accepted the offer and lobbied for alternatives for her teammates rather than rejecting it flatly.