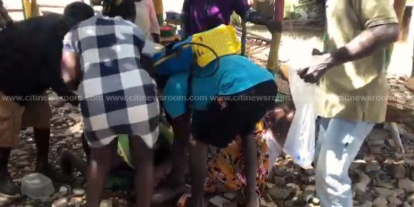 A woman passed out and was rushed to a nearby health facility when her food joint was demolished during the removal of unlawful structures along the Kpeshie Lagoon at La.

The demolition was carried out by a joint task force of police and officials from various Municipal and District Assemblies in Accra.

The woman had declined to speak to the media prior to her food joint being brought down.

Some persons around who were obviously worried and calling out her name attempted to resuscitate her before sending her to the hospital in a car, while some task force members were seen videoing the incident.

The operation followed warnings from the government to encroachers around the water body.

“We had no option but to use minimum force,” the task force leader, Mohammed Aminu Zakaria, said to Citi News.

The demolition exercise is expected to span some 500 metres around the lagoon.

Mr. Zakaria also said he expected the task force to sustain its protection of the land around the lagoon.

“We have a special arrangement with our employers, that whoever does not perform will be booted out. It looks as if this exercise will not be a nine-day wonder. We will be on our toes and be working,” he assured.