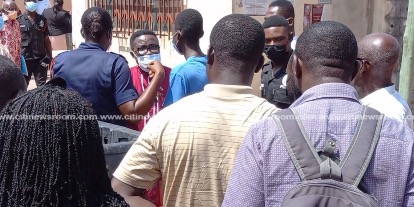 Two persons arrested in a recent kidnapping case at Mpohor described by the police as a hoax, have been denied bail by a court in Takoradi.

They are to spend two weeks in police custody and will reappear in court on November 16, 2021.

They both pleaded not guilty to the charges proffered against them.

Ebo Donkor, the defence counsel for the two, in his plea for bail, said Stephen Kumi must be rather treated as a victim in the case, while Nhyiraba Paa Kwesi Simpson must be seen as one who was only doing his work as a journalist.

“I must say the two counts are dead on arrival. The three ingredients that must show for count 1 to stand must include the fact that, a statement must be false and must be indeed a publication as well as the intent. For A1, there is no evidence that the information received from the girlfriend was false, and again the police have evidence that he paid some money which the police has removed from their fact sheet.”

“So A1 must be treated as a victim. The police have not been able to tell the court that it is false that he actually had a relationship with the girl and didn’t publish anything to be guilty of the second count

“For A2, it is very unfortunate for him to find himself here. The fact does not in any way suggest that A2 made any false statement anywhere. A2 has never published any false news anywhere, as he didn’t publish the story on ghanaweb. That story never attributed A2 as the source of that publication on ghanaweb. The statement that A2 made said that the case has been reported to the Mpohor police and that was only a reported speech from the information given him by A2. On this note, I pray the court to grant A2 bail as he is well known in the Sekondi-Takoradi metropolis and ever ready to assist the police. For A1, he must be treated as a victim and granted bail as he has a family to stand for surety. Again, all these charges are all misdemeanour”, he said.

The Police Prosecutor, Superintendent Emmanuel Basintale, read the charge sheet in court and asked the court to refuse the suspects bail.

“The brief facts of this case indeed support the charges of the case. The defence Counsel alluded that before these charges can stand, there must be the element of publication of false news, there must be the intent and there must be a publication which the police has demonstrated. The A1 (Stephen Kumi), who is the original source of this information admitted to the publication of the false news and sent money to this lady that he met on Facebook. A person he hasn’t seen before or met, doesn’t know the family or where she stays. He could have cross-checked with the Mpohor police or looked for the family hence he intentionally fabricated the story and called Paa Kwesi on his mobile phone which is an electronic device.”

“For A2 (Nhyiraba Paa Kwesi Simpson) who is a senior journalist, he should have been guided by the cardinal rule of journalism –to cross-check information before putting it out. He rushed to put the information out first to receive praise for being the first to publish it. Kidnapping is now a national security matter which is affecting investment in Sekondi-Takoradi and Western Region as investors are afraid. It is a charge that can lead to a sentence of 5 years, hence we’re vehemently against the granting of bail to him. He being a journalist, is likely to interfere with investigations by making those people disappear”.

The court thus refused to grant them bail.

The report of the alleged case of kidnapping involving a 26-year-old woman, Stephanie Kumiwaa, received attention in sections of the media.

But a statement from the police said checks at the Mpohor Police District Command indicated that no such case had been reported there.

The Police Service thus insisted that the kidnapping story was untrue.

During interrogation, Stephen Kumi told the police that he met the victim on Facebook, and they started dating.

On October 17, 2021, Stephanie called to inform him that she was visiting him but did not show up.

However, on October 19, 2021, he received a call from a friend of Stephanie that someone called on Stephanie’s phone number that she had been kidnapped, and the suspected kidnappers demanded a ransom of GH¢2,000.00.

Police escorted suspect Stephen Kumi to Mpohor and all efforts to locate the residence, family relations of Stephanie and Sandra for confirmation of the alleged incident proved futile.

“The Western Regional Police Command wants to use this opportunity to remind the media that they should cross-check all information from the Command for confirmation before publications are done. The police will continue to collaborate with them to combat crime in the region”, the police statement added.

Joana Krah, a 29-year-old woman, was recently arrested in Takoradi for allegedly faking her abduction.

Ms. Joana was charged with deceiving a public officer and publication of fake news and was sentenced to six years imprisonment after pleading guility.

The alleged fake kidnapping and pregnancy

Another similar case, involving one Josephine Panyin Mensah, also emerged in the Takoradi after she allegedly faked a pregnancy and subsequent kidnapping.

She was however arrested and put before the court. She pleaded not guilty in her first appearance in court on Monday, September 27, 2021, despite claims by the police that she had confessed to faking the kidnapping and the pregnancy.

She is facing two charges of deceiving a public officer and publication of false news with intent to cause fear and panic.