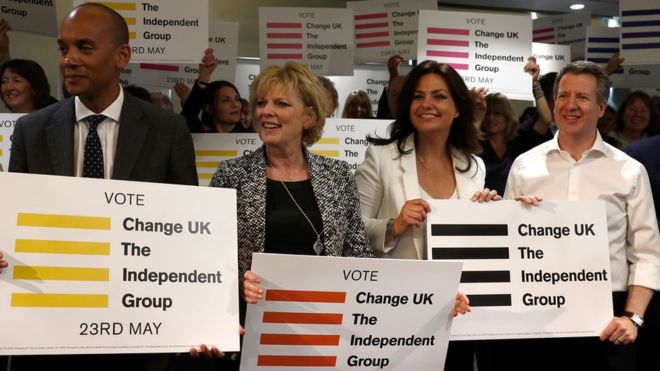 Change UK has launched its campaign for the European Parliamentary elections, with 70 candidates including journalist Rachel Johnson – sister of Tory MP and leading Brexiteer Boris Johnson.

The party – formerly known as The Independent Group – is made up of 11 MPs who quit Labour and the Tories.

They are preparing for the European election as the latest Brexit delay means the UK may have to take part.

Change UK are a pro-Remain party who back another referendum on Brexit.

Ms Johnson, who was most recently a member of the Liberal Democrats, said: “I’m sure that Boris understands why this is not a vote against Boris.

“This is a vote for change. We need to move the dial. People need to have a say.”

Interim leader Heidi Allen told the event in Bristol: “These elections are a chance to send the clearest possible message – we demand a People’s Vote and the right to campaign to remain in the European Union. We are not afraid to say it as clearly as that.

“This is no rebel alliance. This is the home of the Remain alliance.”

“We know Britain is better than the brain-dead politics of the past. We know Change UK is the only all-UK party to bring about changes.

BBC political correspondent Nick Eardley says Change UK want to be the number one choice for those unhappy with Brexit.

But he said it would not be easy because plenty of other more established parties – namely the Lib Dems, the Greens, the SNP and Plaid Cymru – will be making a similar pitch.

A number of parties have begun launching their campaigns for the European Parliamentary elections after Theresa May agreed a Brexit delay until 31 October with the EU.

Mrs May said the UK could still exit before this date if her withdrawal agreement is approved by Parliament.

But, if not, the country is likely to have to hold European Parliament elections on 23 May.

The beginnings of Change UK

The Independent Group was formed after eight Labour MPs and three Tory MPs left their parties in February.

The three Conservative MPs blamed “a shift to the right” in their party and the government’s “disastrous handling of Brexit”, while Labour MP cited their party’s stance on leaving the EU, along with the leadership’s handling of anti-Semitism.

In March, the group applied to become a party with the name Change UK and was given approval in April, meaning they could field candidates in the European elections.

After about 3,700 applications, 70 candidates were picked.

Change UK MP Anna Soubry said: “No ifs no buts, no backroom deals… we were never on the fence, we always believed it and now we demand it… a People’s Vote.

“If MPs can change their minds and change their votes, so can the British people. It is undemocratic, it is plain wrong, to deny people the rights of this country that are enjoyed in Parliament.”