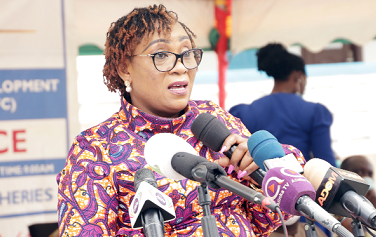 Some fishermen took to their heels on seeing an enforcement team patrolling Ghana’s coast to check illegal fishing practices.

The fishermen, suspected to have been engaged in illegal fishing, abandoned their canoes and other fishing gears leading to the team confiscating 30 generators found in the canoes.

Through the effort of the team, the Minister of Fisheries and Aquaculture Development, Mrs. Mavis Hawa Koomson, who briefed Daily Graphic about the development, said the Ministry had recorded 77 infractions by some fishermen in fishing communities along Ghana’s coast which were at various stages of prosecution.

She said the operations of the enforcement team had led to the arrest and prosecution of five fishermen for flouting the closed fishing season directive.

The five fishermen who were arrested in Amisa Ano in the Central Region, and Hinii in the Western Region have been convicted and fined by the various district courts they were put.

Kuralen Atta, Michael Awusi and John Sheetor were arrested at Amisa Ano, while Joseph Kuko and Enoch Ano were also arrested at Hinii.

They were arrested for fishing between July 1 and July 31 when the Ministry of Fisheries and Aquaculture Development declared that artisanal fishers take a break from fishing and allow the fishes to reproduce.

They fishermen were fined 100 penalty units each after they all pleaded guilty to the charges against them. A penalty unit is GH¢12 which translates to GH¢1,200 for each of them.

Mrs. Koomson said she was hopeful their conviction would serve as a deterrent to other fishermen to comply with the Fisheries regulations and directives.

She commended the enforcement team for their hard work and commitment to the fight against illegal fishing practices that was depleting the nation’s fish stock.

Mrs. Koomson said but for the few infractions, the compliance level of fishers to the 2021 closed fishing season was high.

She said the arrest and prosecution of the five fishermen for infractions during the closed season had made a statement that the ministry would deal with fishermen without fear or favour if they went against the law.

The ministry, she said, would ensure all laws regarding fishing were enforced.

She said Ghana recently received a formal warning known as a Yellow Card from the European Commission for unsustainable fishing practices.
She added that the country risked sanctions if drastic measures were not implemented.

When asked about the fine not being stringent enough, she said “for now, that is the punishment in our existing law but work is ongoing to come up with a new law that would replace the existing Fisheries Act 202(Act 625).

In the new law, she said she was hopeful the punishment for such offences would be more stringent.

The closed season was introduced by the Ministry of Fisheries and Aquaculture Development in 2018 but after a few challenges, it was deferred to 2019.

In 2019, the fishing closed season was observed between May 15 and June 15, which scientist said was not a favourable period. They had suggested July and August each year.

In 2020, the closed season was not observed because of the COVID-19 pandemic. However, in 2021, the season was observed between July and August.

The artisanal fishers stayed away from fishing between July 1 and July 31 while industrial vessels took a two-month break from July 1 to August 31.

On the success of the fishing closed season initiative, the Executive Director of the Fisheries Commission, Mr. Michael Arthur Dadzie, said it would yield results in the long term.

“We have to continue to do it over a period. A number of countries have done it and they saw the results over a period,” he said.