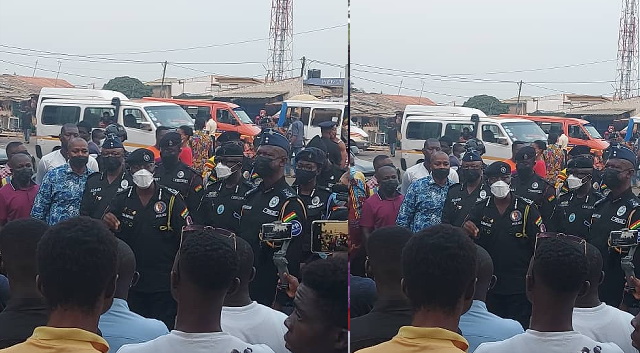 The Inspector General of Police (IGP), Dr. George Akuffo Dampare has urged the public to expose criminals for a reward and help the police Administration in its renewed fight against crime.

“Those who know criminals must sell them to the police by exposing the criminals and getting money for sharing credible information that will lead to the arrest and prosecution of such miscreants,” he said.

He said the criminals live within communities and are known by the public who sometimes cover up for such lawbreakers.

The IGP made the call during a visit to the Tema Regional Police Command on Christmas Eve, December 24, 2021.

The police chief who was to spend his day and night in the Tema region, was visiting some victims of crime such as the mobile money vendors who were attacked at Sun City, Adjei Kojo, and also hold community engagements with traditional leaders, youths, the business community and other groups.

During his interaction with the victims at Sun City, Adjei Kojo, he assured them that the police would do everything possible to arrest and prosecute the perpetrators behind the attacks on mobile money vendors.

He has consequently placed a GH¢20,000 bounty on the heads of the persons behind the crime.

He also held community engagements with residents of Sun City, Adjei Kojo near Ashaiman, and Tema Manhean where he urged community members to partner police to deal with crime related activities.

Police presence
Dr. Dampare has also directed the Tema Police Command to saturate the Tema City and other areas such as Ashaiman and Adjei Kojo, Gbetsile and Afienya with police presence.

He asked police personnel to stop taking bribes from the public and the public to desist from giving monies to the police.

Dr. Dampare said the role of traditional leaders and opinion leaders was key in fighting crime in all communities and urged them to support the police.