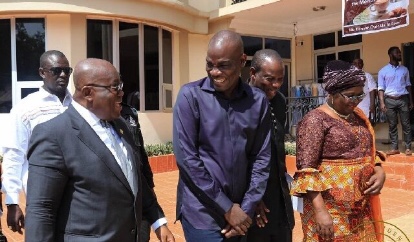 The meeting according to Majority Leader in Parliament, Osei Kyei-Mensah-Bonsu was his initiative to build consensus in parliament contrary to claims he has done little in that regard.

“We have gone to see President Akufo-Addo on three different occasions through my instrumentality. Just so that we bond together. Akufo-Addo is the President who has also met the leaders of parliament on so many occasions. It has never been done before apart from President Kufuor who did it once and because of newspaper coverage the leaders of the opposition decided not to be part of such meeting again. Akufo-Addo has done so on three occasions through my own instrumentality”, he disclosed.

Historically, he touted himself as the best in building consensus in the Fourth Republic than any leader indicating that he gets shocked and surprised a section of the public including members of the New Patriotic Party(NPP) are accusing him of otherwise

It would be recalled that a former member of parliament for North Dayi in the Volta region, George Loh, accused the Majority Leader of not showing good leadership in the current dispensation.

In his view, the majority leader displays arrogance and that, he believes, has blocked any consensus building in Parliament.

George Loh, was speaking in an interview with Happy FM’s Don Prah on the ‘Epa Hoa Daben’ show when he said: “I have not been impressed by the leadership of Osei Kyei Mensah Bonsu. He displays arrogance. And when issues come up, the way he goes after the speaker is very wrong. Yesterday in parliament, he was using words that were unbefitting as a leader in the house. He shouldn’t have used those words. His attitude doesn’t make room for consensus building and that is the major problem.”