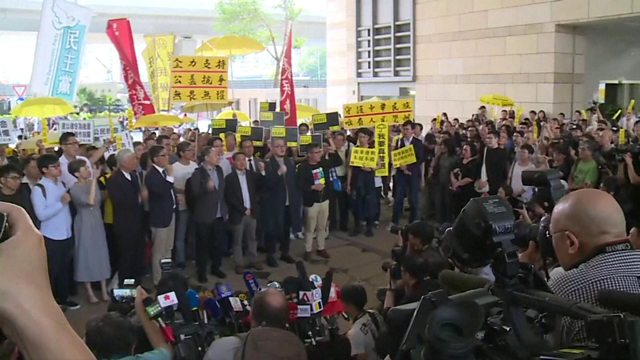 Nine pro-democracy activists in Hong Kong have been found guilty of public nuisance charges for their role in a civil disobedience movement that called for free elections in the city.

Among them are three prominent activists, seen as figureheads of Hong Kong’s pro-democracy movement.

They could be jailed for up to seven years for their part in the “Umbrella Movement” protests of 2014.

Thousands marched demanding the right for Hong Kong to choose its own leader.

They are seen as the founders of the movement that galvanised protesters in their campaign of civil disobedience.

“No matter what happens today… we will persist on and do not give up,” Mr Tai told reporters ahead of the verdict.

Mr Tai, Mr Chan and five others were found guilty of two charges of public nuisance, and Mr Chu and one other of just one charge.

A large crowd gathered outside the court on Thursday to support them. It is not yet clear when they will be sentenced.

The nine defendants walked into the court building looking refreshed and in high spirits. All but one said a few words in what might have been their last hours of freedom before their predicted jail term.

Delivering his verdict, Justice Johnny Chan said the defendants had caused a nuisance – by occupying major roads – leading to injuries among civilians. The nine looked calm and not particularly emotional. By lunchtime they had gone, released on bail. Benny Tai, Chan Kin-man and Chu Yiu-ming smiled as they passed me, as if it was just another day.

They are yet to say if they will appeal. The court was adjourned for the day as the lawyers are yet to finish their mitigation submissions. The sentences have yet to be announced.

The broader pro-democracy camp already has bad relations with Beijing. Activists and politicians did express their anger but political analysts also warn that people might simply leave the movement out of frustration.

Seventy nine days of sit-in protests have already changed Hong Kong a lot. But today’s verdict might serve more as a reminder that this city remains divided.