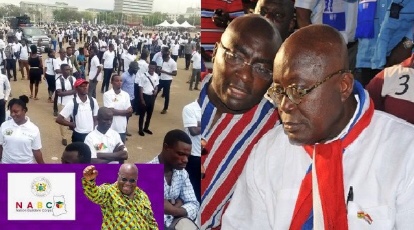 The Nation Builders Corps, NABCO were instituted by President Akuffo-Addo when first voted into power in 2016. The main aim of the corps was to employ the youth of Ghana and those employed will be paid an allowance of 700 Ghana Cedis.

Some of them also used the opportunity to express their utmost disappointment in President Akuffo Addo’s government. They reckon that this is not how the President promised to rule the country while in opposition. They said the country is already too expensive to live in because of Nana Addo’s poor governance and he’s adding unpaid allowances to it to make it more stressful and difficult to live in the country.

A couple of them also took the opportunity to call on all the media houses in the country to also speak to the government to ensure their small allowance is paid to them.

Below are various tweets from Ghanaians venting their anger on President Nana Addo Dankwa Akuffo-Addo and Vice President Dr. Mahmoud Bawumia led government to as a matter of urgency pay them in full all their outstanding allowance.