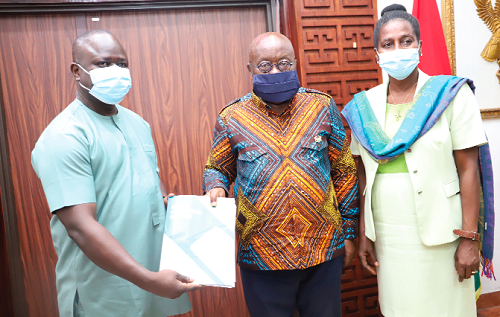 The Ghana Statistical Service (GSS) will, before the end of this year, undertake another important survey which will look at the integrity of public services in the country.

This survey, which will be institutionalised, will seek to address the United Nations Sustainable Development Goal (SDG) 16, which touches on the promotion of peaceful and inclusive societies for sustainable development.

The Government Statistician, Professor Samuel Kobina Annim, made this known when he briefed President Nana Addo Dankwa Akufo-Addo on the outcome of the 2020 Population and Housing Census (PHC) at the Jubilee House in Accra last Wednesday.

Goal 16 of the SDGs talks about peace, justice and strong institutions and aims to significantly reduce all forms of violence and work with governments and communities to end conflict and insecurity.

Promoting the rule of law and human rights is key to this process, as it reduces the flow of illicit arms and strengthens the participation of developing countries in the institution of global governance.

Prof. Annim said once the GSS was done with the 2020 PHC, which will give the base for inter-census surveys, it would undertake the survey of the integrity of public services in the country.

He explained that it would be done in collaboration with the German government, adding that once rolled out, it would be institutionalised over time.

Prof. Annim further disclosed that for the next three years, the GSS would commence surveys that would help re-base the country’s GDP and inform the economic indicators.

He gave an assurance that the service was ready to assist relevant ministries, departments and agencies, as well as metropolitan, municipal and district assemblies (MMDAs), to take full advantage of the over two million indicators that would come out of the census.

Explaining further the outcome of the census, the Government Statistician said the age and sex distribution pointed to a pyramid which indicated that the population remained youthful, but the threat was that the share of the youth was declining.

He stressed the need for the nation to take advantage of the returns of the demographic dividend and invest more in the youth.

That, he noted, called for an inter-sectoral committee that would look at the quality of the youth that the country possessed.

“Yes, we have the numbers, but what are the qualities of the youth that we have in terms of education, health, and so on, so that they can take advantage of the returns of the demographic dividend?” Prof. Annim queried.

He said since the country had the youth bulge, what it needed to think about was the age dependency, but the threat was that the dependency ratio would go up, leading to more of the aged population.

“The threat in here is that if people do not save and invest around this time, the aged population will continue to depend on the youth,” he added.
It was for that reason that the GSS was calling for some investment in the quality of the youth, from the educational and health perspective, he said.

The GSS Boss said the census had revealed that Ghana’s population had increased by almost five-fold since independence, when the population was around 6.7 million, currently standing at 30.8 million.

He said for the first time, the country was witnessing its lowest population growth rate, which used to be 2.1 per cent, peaking up to 2.7 per cent in the 1984 census and currently standing at 2.1 per cent, and explained that although the population was growing, it was doing so at a declining rate.

President Akufo-Addo commended the GSS for a good work done.

He said Ghanaians were grateful for the data generated, which were going to yield important information that would aid public policy.

“The methodical and efficient manner in which you had gone about it was something that caught the attention of the nation and deserves the plaudits of the nation as well,” he noted.

He said the rest of the steps and the recommendations the GSS would make that would need government action would be given due attention.