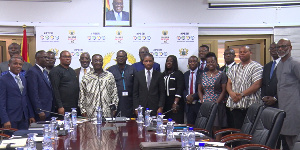 Government through the Finance Ministry has established a Forex Development Committee that will look into policy measures and interventions to prevent the recurring depreciation of the cedi from assuming the impact of the central bank.

The move follows a promise made by the Finance Minister, Ken Ofori Atta last year that government would establish a bi-partisan committee to investigate the structural causes of the cedi depreciation and propose adequate measures.

The membership of the committee, however, is drawn from the Office of the Vice President, Bank of Ghana, Agriculture Ministry, Ghana Union of Traders Association (GUTA), Association of Ghana Industries, some universal banks among other key stakeholders.

The Deputy Finance Minister, Charles Adu-Boahen, speaking at a press briefing in Accra to inaugurate the committee explained that the mandate of the committee is to review the current Forex (FX) regime, offer workable alternatives by way of policy interventions which potentially would reduce FX risks in the economy and also identify the inherent constraints in the system.

“The FX Development Committee which is chaired by the Finance Minister, Ken Ofori-Atta is also to critically look at the role of automation and digitization as a critical enabler of FX reforms,” he said.