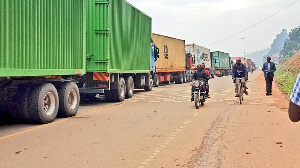 The Ghana Traders Union Association (GUTA) has criticised ECOWAS for failing to step in to get Nigeria to open its borders with neighbouring West African countries, which were recently closed.

Nigeria is said to have closed the borders in a move by the government to stop about 45 products from being smuggled into the country from other ECOWAS member states.

Also, some ECOWAS citizens who have had brushes with the law are allegedly being repatriated by Nigeria, yet the populace nation is said to be preventing other nations from deporting Nigerians in similar situation.

According to GUTA, the closure of Nigeria’s frontiers is impeding free movement of people, goods and services to and from the affected ECOWAS state.

“Surprisingly, however, the ECOWAS Commission has not issued any statement in that regard,” GUTA said in a statement Thursday.

GUTA contented that the ineffectiveness of ECOWAS in intervening in the issue was rendering the protocols of the regional body, whose posturing it said, smacks of unfairness and lack of equity.

It observed that whenever Ghana decides to enforce its laws, “ECOWAS Commission steps in to put pressure in the name of sub regional integration whiles they [ECOWAS] look on for Nigeria to have her own way anytime it suites her”.

Ghana, it said, has been battling smuggling of all kinds of goods through the eastern corridor; something it said, was seriously affecting revenue collection, as well as allowing substandard and dangerous goods through this corridor.