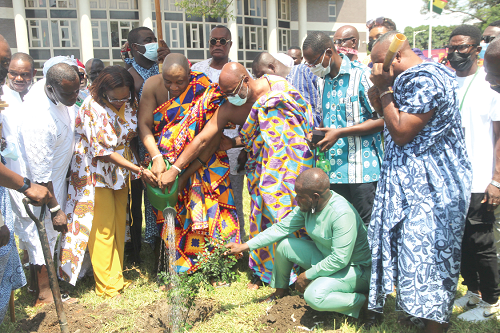 The Ga Mantse, King Tackie Teiko Tsuru II, has pledged his support for the “Let’s Make Accra Work” agenda to ensure that sanity and discipline prevail in the region.

In that regard, he has given the assurance that his outfit would collaborate with the Greater Accra Regional Coordinating Council (GARCC), the Accra Metropolitan Assembly (AMA) as well as the security services to ensure its successful implementation.

Let’s Make Accra Work” is an initiative by the GARCC which seeks to address the complex challenges of the region, particularly, the busy centres, which negatively affects the region’s productivity.

King Teiko Tsuru gave the assurance when he visited the AMA to gather first-hand information on the state of the assembly and also to inspect some ongoing developmental projects.

“We have witnessed many interventions by various governments to make Accra clean. The problem of sustainably collecting and disposing of plastic waste in Accra has persisted for well over a decade. Plastic waste clogged-gutters and plastic-littered streets in the national capital, the beaches are not left out.”

“However whether Accra is clean now or not, as part of efforts to ameliorate the menace, as the Ga Mantse and the President of the Ga Traditional Council we are committed to support your outfit and the government to ensure Accra is clean,” the Ga Mantse said.

He also gave an assurance that his outfit, together with GARCC and other stakeholders, would roll out a holistic and innovative initiative that aimed at tackling challenges such as climate change by viewing waste as a resource and an opportunity in the first quarter of 2022.

He therefore called on all corporate institutions in the region to effectively play a part in such an endeavour.

King Teiko Tsuru also disclosed that his outfit was working with the Ministry of Youth and Sports, civil society organisations, corporate Ghana and other multilateral organisations to commence a Ga youth forum to empower the youth in the region.

In the meantime, he said, his office would immediately engage the security services and other stakeholders to effectively clamp down on all social vices in the region.

He further assured all that his door would always be open to all metropolitan, municipal and district assemblies (MMDAs) in the region.
That, according to him, would help promote a very cordial relationship to propel development.

The CEO of the AMA, Mrs Elizabeth Naa Kwatsoe Tawiah Sackey, expressed her gratitude to the Ga Mantse for the royal visit.

“I wish to indicate that the arrival of His Royal Majesty symbolises the renaissance of the Great Ga State traditionally. In the same vein my appointment as the first lady Mayor of the AMA reinforces the political emancipation of the people of Accra,” she said.

She assured the king that education development, job creation, infrastructural development, security and social protection, art and culture and good governance would be the assembly’s topmost priority.

Those identified issues, Mrs Sackey said, reinforced the need for the assembly to join hands tightly with Ga Mantse in the planning, mobilisation, advocacy and lobbying at every level of government to secure the needed support for the betterment of the region.