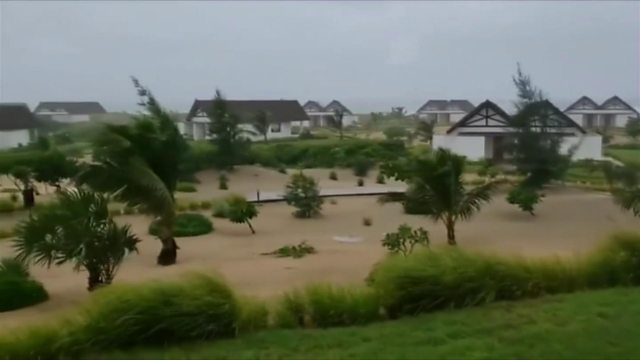 A powerful cyclone smashed into Mozambique on Thursday, barely a month after a previous cyclone killed hundreds and devastated large areas.

The storm was then downgraded as winds fell but heavy rains followed and are expected to last for days to come.

Mozambique was still recovering from Cyclone Idai, which killed more than 900 across three countries in March.

One person was reported dead in Mozambique after being crushed by a falling coconut tree. The cyclone had already killed three people on the island nation of Comoros.

Winds eased on Friday, but France’s meteorological agency said 600-800mm of rain was expected to land on Mozambique over coming days.

Aid agencies have raised concerns about the effect of the coming rain on communities prone to flooding and landslides.

The level of rainfall expected is nearly double the 10-day accumulated rainfall that caused devastating flooding in the port city of Beira, further south, during Cyclone Idai.

The UN’s World Food Programme said it was working on an “emergency preparedness plan” with the Mozambican government and other humanitarian groups.

Mozambique’s National Institute of Disaster Management (INGC) said 30,000 people had been evacuated from affected areas, and reports from northern Mozambique said many homes had collapsed and the provincial capital of Pemba had lost its power supply.