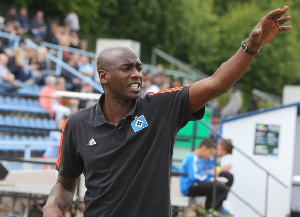 More often than not, many footballers enter into coaching after they hang their boots and even with some of them, they undertake coaching courses getting to the twilight of their careers so that when they retire, they start their new adventure.

Coaches like Zidane, Laurent Blanc, Frank Lampard, Steven Gerrard and others played soccer to the highest level and they have also veered into coaching.

Currently in Ghana, we have Ibrahim Tanko, Maxwell Konadu, Michael Osei, Charles Akonnor, Godwin Attram, as well as Winfred Dormon who are former national team players and are carving a niche for themselves in coaching.

The ex Ghana Black Stars number one goalkeeper joined his former club Churchill Brothers in India in May, 2019 as the Head Coach of the club.

The soft spoken Ansah has enormous experience in the coaching field having handled the Black Leopards of South Africa and also as Deputy Coach for Accra Hearts of Oak and Dreams FC.

He has the support of the board and has been tasked to bring the glory days back.

Arguably the most talented footballer of his generation and one of the most naturally gifted players Ghana has ever seen, Armando spent most of his playing career in Dubai (UAE) where he featured for Al Nasr and Shabaab Al Ahli. He also attained cult status with Krylia Sovetov and Locomotive Moscow in Russia.

Armando who was staying in Russia was appointed the technical director of Amateur league side, Forceis FC in Dubai. He is also a scout for Pro League clubs Al Jazira and Al Nasr.

Barnes was an integral part of the Black Starlets team which won the 1991 FIFA Under-17 World Cup in Italy and also captained the side to second place in 1993 in Japan.

An attacking player who was turned into a right-back by coach Isaac Paha, Barnes spent almost all his playing time in Germany where he featured for Leverkrusen, Mainz O5, Oberhausen and a couple of lower division teams.

He was appointed as Under-14 Coach for Leverkrusen in 2013 and has been very key in their youth development programme.

In the history of Bayer Munich, no foreign player has lasted so long at the club than the Ghanaian. He joined the Bavarians at the age of 16 in 1995 and spent 16 years at the club with the second team.

He retired at Bayer in 2011 and in 2012, he was appointed as their Under-17 Coach after he attained his coaching license.

Born in Hamburg, Addo chose to represent and was part of the Ghana team which played in the 2006 World Cup in Germany.

After retiring from football in 2008, he undertook coaching courses and has worked as Assistant Coach for Hamburg, Nordsjaelland and Monchengladbach. He was also a scout for the Black Stars from 2013 to 2015.

Addo is one of the Deputy Managers for Lucien Favre at Dortmund senior side and also takes charge of the youth team as Head Coach.