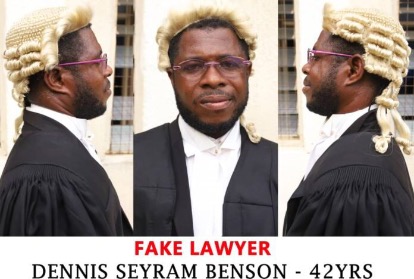 The fake lawyer, who was arrested in court during the Western Togoland Restoration Front case, Dennis Seyram Benson, has been convicted and sentenced after pleading guilty to 10 charges.

The convict, who had earlier pleaded not guilty, changed his plea to guilty when he appeared before the Kaneshie District Court to six counts of “deceit of court by personating contrary to section 215 of the Criminal Offences Act, 1960 (Act 29)” and four counts of “unlawful practice as a lawyer contrary to section 9((1) and (2) of the Legal Profession Act 1960 (Act.32).”

This was after his counsel Chris Akumey pleaded for mitigation to the court to say he is a first-time offender and prayed against custodial sentence.

Though the prosecutor, Detective Chief Inspector Amoah Richard prayed for the court to impose a punishment that will be deterrent enough to others who intend to venture into such criminal trade, the court acted otherwise.

The court, presided over by His Worship Isaac Oheneba Kuffour, sentenced the accused to a fine of 250 penalty units (3,000.00) in default 16 months imprisonment.