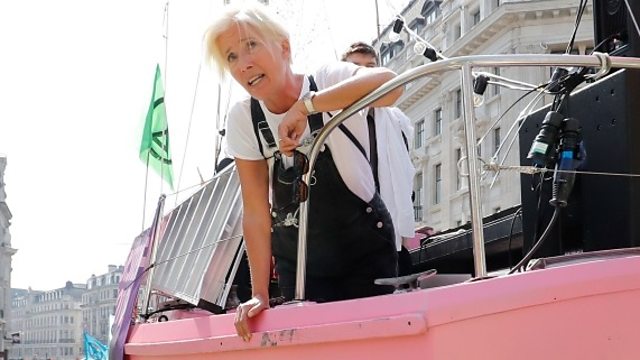 Hundreds of police officers have closed in on Extinction Rebellion protesters in central London as demonstrations entered a fifth day.

Police have cleared Oxford Circus of protesters and have started to dismantle a pink ship that has formed the centrepiece of the demonstrations.

Nearly 700 people have been arrested at protests this week in central London.

Specialist officers wearing helmets and harnesses have taken down the mast of the boat, while a wide cordon has been set up around the junction of Oxford Street and Regent Street.

Speaking from the boat, Dame Emma, who joined the protests after flying from Los Angeles on Thursday, said: “We are here in this little island of sanity and it makes me so happy to be able to join you all and to add my voice to the young people here who have inspired a whole new movement.”

Under the blazing sun, people were handing out water and asking if anyone wanted sun cream, some shielding themselves from the heat with rainbow-striped umbrellas.

But this is a bank holiday gathering with a difference, between police and activists converged at the centre of Oxford Circus.

If the police had kept more of a low-key presence earlier this week, there was no mistaking them now.

Dozens formed cordons in concentric circles – one around the pink boat at the protest’s centre, then one around the press and protesters – and lines of officers further down Regent Street, preventingmore people coming closer.

And officer numbers increased in the afternoon, with teams armed with tools removing those who had attached themselves to the boat.

The atmosphere has been good natured, with protesters chatting to officers, with a drum beating and colourful flags fluttering in the slight breeze.

But every now and then, whistles and cheers have gone up as protesters have been carried away to waiting police vans, with shouts of “climate justice now”.

One protester addressing the activists by loudspeaker emphasised it was a peaceful event, urging people not to engage in any violent behaviour.

She asked people to turn to the nearest police officer and say “I love you”, to cheers from the crowd.

Before long, those same officers were removing another one of the activists.

It comes as a small group of demonstrators staged a protest at Heathrow Airport amid threats to disrupt flights over Easter.

Protesters stood by the tunnel leading to Heathrow Terminals 2 and 3, but all roads remain open.

However, Robin Ellis-Cockcroft, 24, said the group had succeeded in creating an “emotional disruption” at Heathrow, adding that no further Extinction Rebellion protests would take place on Friday.

Ken Marsh, chairman of the Metropolitan Police Federation, said: “This is very, very difficult for us because my colleagues have never come across the situation that they are faced with at the moment.

“They are dealing with very, very passive people, probably quite nice people, who don’t want confrontation whatsoever with the police or anyone else but are breaking the law.”

Environmental activists have also been in action in other parts of the world.

In Paris, they blocked the entrance of the Societe Generale bank headquarters, as part of a protest urging world leaders to act on climate change.

Pepper spray was used by anti-riot police in an attempt to disperse the demonstrators.

Activists also gathered outside the Ministry of the Ecological and Inclusive Transition in La Defense, near Paris, and blocked the entrance of the headquarters of French oil giant Total there.

Meanwhile, two of the UK’s leading thinkers on climate change dismissed the demand of Extinction Rebellion for virtually zero carbon emissions by 2025, arguing the 2050 date was more realistic.

Corrinne Le Quere, professor of climate change and science and policy at the University of East Anglia, told BBC Radio 4’s Today programme that 2025 was “probably quite unrealistic” as a target to “move completely away from fossil fuels”.

The economist Lord Stern agreed, saying: “The target of zero net emissions by 2050 makes sense and that looks like the right one, and I think the government is quite likely – at least I hope it will, and we’ll be pressing them to do that – to come up with that target sometime in the next few months, and I think it’s very important they do.”