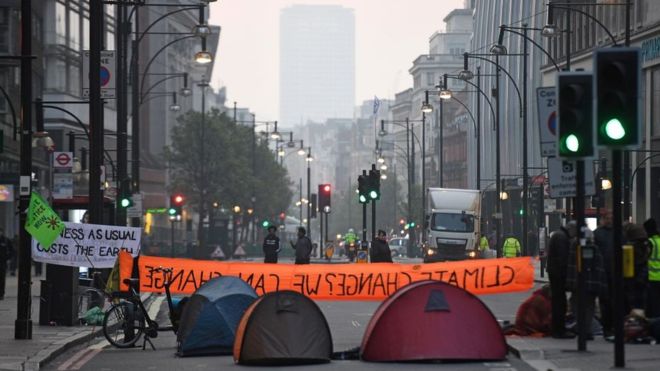 More than 100 climate change activists have been arrested for blocking roads in central London, amid protests aimed at shutting down the capital.

Police ordered them to restrict their protest to Marble Arch after causing widespread disruption on Monday.

Transport for London warned bus users that routes would remain on diversion or terminate early.

Extinction Rebellion, which is calling on the government to reduce carbon emissions to zero by 2025, wants to “shut down London” until 29 April in a series of protests.

It called for “reinforcements” to help maintain the roadblock at Waterloo Bridge on Tuesday.

Some protesters glued themselves to a lorry parked on the bridge to hinder the police effort to move them on.

On Monday, a pink boat was parked in the centre of Oxford Circus where some activists locked their arms together with makeshift devices, while oil company Shell’s headquarters on Belvedere Road were vandalised.

Organisers claim protests have been held in more than 80 cities across 33 countries.

The second day of action will include speeches at Parliament Square about how to tackle climate change.

Many people trying to travel across London criticised the disruption, while others said the vandalism was “disgusting”.

Peter Newport said on Twitter: “I agree with freedom of speech but if I can’t get to work its costing me money.”

The government said it shared “people’s passion” to combat climate change and “protect our planet for future generations”.

The Department for Business, Energy & Industrial Strategy said the UK had cut its emissions by 44% since 1990.

A spokesperson said: “We’ve asked our independent climate experts for advice on a net zero emissions target and set out plans to transition to low emission vehicles and significantly reduce pollution through our Clean Air Strategy.”