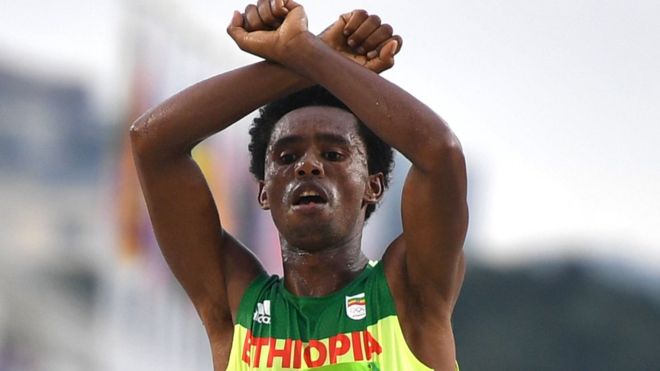 An Ethiopian runner who brought the world’s attention to a wave of protests in Ethiopia at the Rio Olympics has finally been awarded by his government.

The athlete had held up his crossed wrists as if they were shackled as he took marathon silver in 2016 in protest at the treatment of demonstrators.

He had remained in exile for two years, saying his life might be in danger.

But sweeping reforms implemented by Prime Minister Ahmed Abiy, who came to office a year ago, encouraged Feyisa to return home last October.

Mass demonstrations by members of the Oromo community – Ethiopia’s largest ethnic group – had precipitated the resignation of his predecessor.

”I’m very happy, not because of the prize money. I’m happy because I’m witnessing my struggle being fruitful in the country,”.

He joined Mr Abiy and President Sahilework Zewude in doing a gesture showing that his hands were now unshackled.

Anti-government protesters had used the crossing of arms above their heads as a symbol of defiance.

Feyisa became the first Ethiopian to finish in the top two of a men’s Olympics marathon since 2000, taking silver behind Kenya’s Eliud Kipchoge.

After his political protest, Ethiopian officials denied he was in danger, saying he would be welcomed home from Rio as a hero.

But at the time, Mr Feyisa said he had relatives who were in prison and if they talked about democratic rights they would be killed.

Feyisa is from Oromia, home to most of Ethiopia’s 35 million Oromo people, where a wave of anti-government protests began in the region in November 2015 with people complaining about social and political marginalisation.

The demonstrations led to the resignation of Hailemariam Desalegn as prime minister in February 2018.

In just a few months, his successor had lifted the state of emergency, ordered the release of thousands of prisoners, allowed dissidents to return home and unblocked hundreds of websites and TV channels.

He also ended the state of war with Eritrea by agreeing to give up disputed border territory, in the process normalising relations with the long-time foe.